We’ve been getting word from some international Apple retailers that not only are MacBook Airs, Minis and White MacBooks getting updated soon, but those Macs are also going to see modest-significant price drops in some countries we’ve polled.  While we can’t get into the specifics of where and how much, we can tell you some models are being reduced more than the equivalent of $100.

A few things to consider: One, the US Dollar has dropped significantly against Pacific currencies like the Japanese Yen and Korean Won (below) in the past year.  Apple has in the past adjusted its products against currency fluctuations. 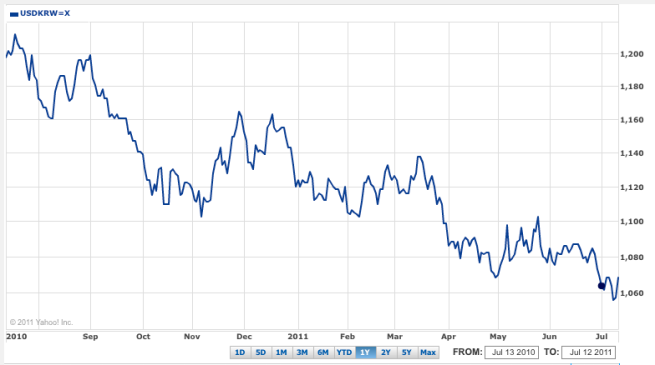 Also, Apple has been streamlining operations across the globe over the past few years and has been able to bring its prices more in line with US prices.

While these price drops are great news for our friends overseas, it doesn’t necessarily correlate to price drops in the US.

But we wouldn’t rule price drops out either, there have been unreliable reports of a $899 base price of a MacBook Air.