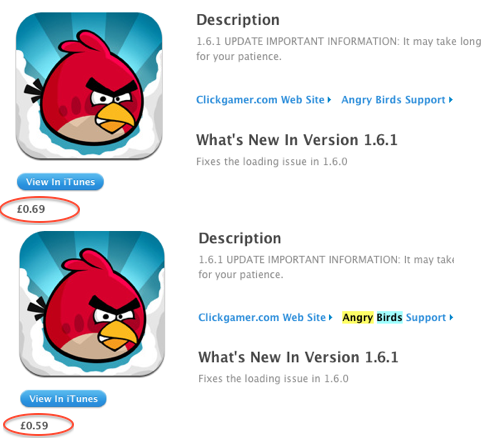 Price change in the UK

Amid their goal to even out prices internationally with those in the United States, Apple has raised prices (and lowered!) for applications across the international App Store. Of note for the UK, a 99 cent application (U.S.) now costs £0.69 up from the £0.59 of yesterday. Additionally, apps which were £1.19 are now £1.49. These changes are also international with a slight price drop in Switzerland and in Japan. Apps in Japan now start at 85 Yen versus the 115 Yen of yesterday. Let us know the changes you spot in other countries. It looks like changes are in effect in the UK, Mexico, Japan, Switzerland, and Australia. Here are some examples:

From reader Pump in Switzerland:

From Dean and David G. in Australia

From a reader in Mexico: