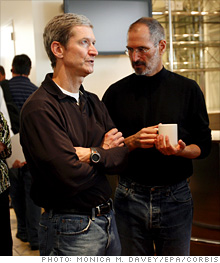 Since Steve Jobs went on medical leave this winter, some members of Apple Inc.’s board have discussed CEO succession with executive recruiters and at least one head of a high-profile technology company, according to people familiar with the matter.

The conversations weren’t explicitly aimed at recruiting a new chief executive and were more of an informal exploration of the company’s options, said these people. The directors don’t appear to have been acting on behalf of the full board, some of these people said. Apple has seven directors, including Mr. Jobs. It is also unclear whether Mr. Jobs was aware

Interestingly, the WSJ actually got a response from Jobs. “I think it’s hogwash.” he said.

According to the report, Board members have even held talks about the company’s leadership with some search firms after those recruiters informally approached them, said three of these people. (…or at least according to voicemails left on their machines?)

It would be shocking if Apple had to look outside its own walls for a successor, at least outside of interviewing for due diligence purposes.  Full article available through Google Plus.