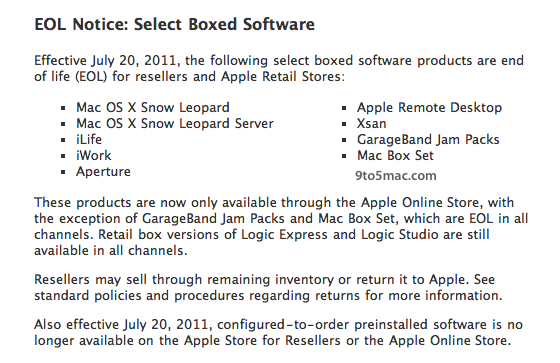 Today Apple announced End of Life (EOL) status for several boxed software titles. As of 7/20/11 Apple will be discontinuing boxed versions for the following software at Apple retail and Authorized reseller stores:

The aforementioned software titles will only be available from the Apple online store.  The only exclusions are “GarageBand Jam Packs” and “Mac Box Set,” which will no longer be available through any channels.  This is certainly another move by Apple to decrease the Mac user’s dependence on physical media.  Not one of today’s Macs has an optical media drive.  Apple announced this immediate change via a “U.S. Field and Channel Sales” email sent to resellers, Apple consultant Network, and others.  This news comes hot off updates to the MacBook Air, Mac Mini, and OS X Lion release.