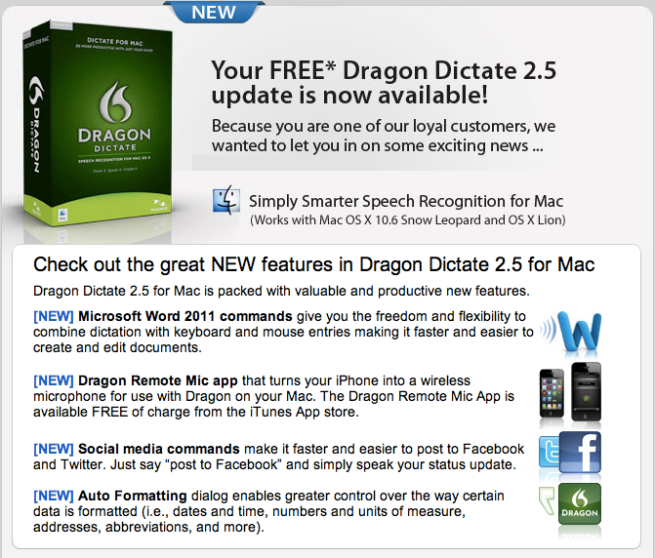 Dragon just updated its Dictate software for Mac with some interesting new additions.  Most notable is the ability to dictate with your iPhone using an iTunes app.    Also, updated is the ability to Tweet or post to Facebook or search the web with just a command:

Dragon Dictate 2.5 for Mac lets you accomplish more on your Mac than you ever imagined possible. Dragon Dictate 2.5 delivers amazing new features that will help you get more done faster whether you’re at home, at work, or wherever life takes you. One of the best new features of Dictate 2.5 is the ability to combine talking and typing in Microsoft Word. In previous versions of Dragon Dictate, users were forced to complete their documents entirely by voice. But Dictate 2.5 gives users the freedom to interact with their computers using the method that works best at any given moment – dictation plus mouse or keyboard entry. The result is complete flexibility and improved efficiency for document creation and editing within Microsoft Word 2011. Additional flexibility is delivered with new Auto Formatting capabilities so that you can be sure Dragon Dictate works the way you work.

Dragon Dictate also works with the new Dragon Remote Microphone app (free from the Apple app store) so that you can turn your iPhone or iPod touch into a wireless microphone. Now you can achieve the same great accurate recognition without the headset wires!

Getting Started with Dragon is Faster and Easier