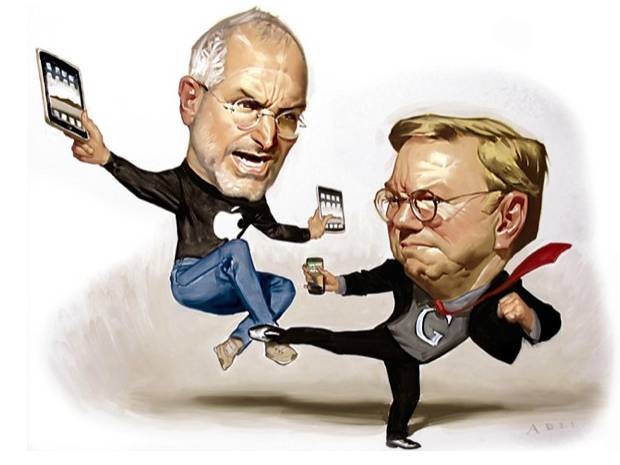 Google Senior Vice President and Chief Legal Officer David Drummond has written an open letter to Apple and others (namely Microsoft) for the latest trend of going after smartphone patents by buying up others companies patents. Drummond notes that Apple and Microsoft “have always been at each other’s throats” and “when they get into bed together you have to start wondering what’s going on.” Google’s Drummond is referring to the two technology heavyweights “banding” together to win the Novell and Nortel’s old smartphone related patents. As revealed just a few weeks ago, a Consortium of Apple, Microsoft, and Oracle payed $4.5 billion for the aforementioned Nortell patents.

Drummond outright calls this “a hostile, organized campaign against Android by Microsoft, Oracle, Apple and other companies, waged through bogus patents.” Drummond also says that the approach to acquire patents and file patent lawsuits is Apple’s (and others’) way of showing that they “want to make it harder for manufacturers to sell Android devices.” He also says that Apple and others are going after these patents and filing complaints “instead of competing by building new features or devices.”

Drummond also says that Google feels that Apple and Microsoft’s take over of the Nortel patents is unlawful:

Fortunately, the law frowns on the accumulation of dubious patents for anti-competitive means — which means these deals are likely to draw regulatory scrutiny, and this patent bubble will pop.

Drummond ends by saying that Apple and Microsoft’s moves could potentially hurt Android and they are obviously looking into ways to stop this.

Unless we act, consumers could face rising costs for Android devices — and fewer choices for their next phone.

The full letter is after the break:

I have worked in the tech sector for over two decades. Microsoft and Apple have always been at each other’s throats, so when they get into bed together you have to start wondering what’s going on. Here is what’s happening:

Android is on fire. More than 550,000 Android devices are activated every day, through a network of 39 manufacturers and 231 carriers. Android and other platforms are competing hard against each other, and that’s yielding cool new devices and amazing mobile apps for consumers.

But Android’s success has yielded something else: a hostile, organized campaign against Android by Microsoft, Oracle, Apple and other companies, waged through bogus patents.

They’re doing this by banding together to acquire Novell’s old patents (the “CPTN” group including Microsoft and Apple) and Nortel’s old patents (the “Rockstar” group including Microsoft and Apple), to make sure Google didn’t get them; seeking $15 licensing fees for every Android device; attempting to make it more expensive for phone manufacturers to license Android (which we provide free of charge) than Windows Mobile; and even suing Barnes & Noble, HTC, Motorola, and Samsung. Patents were meant to encourage innovation, but lately they are being used as a weapon to stop it.

A smartphone might involve as many as 250,000 (largely questionable) patent claims, and our competitors want to impose a “tax” for these dubious patents that makes Android devices more expensive for consumers. They want to make it harder for manufacturers to sell Android devices. Instead of competing by building new features or devices, they are fighting through litigation.

This anti-competitive strategy is also escalating the cost of patents way beyond what they’re really worth. Microsoft and Apple’s winning $4.5 billion for Nortel’s patent portfolio was nearly five times larger than the pre-auction estimate of $1 billion. Fortunately, the law frowns on the accumulation of dubious patents for anti-competitive means — which means these deals are likely to draw regulatory scrutiny, and this patent bubble will pop.

We’re not naive; technology is a tough and ever-changing industry and we work very hard to stay focused on our own business and make better products. But in this instance we thought it was important to speak out and make it clear that we’re determined to preserve Android as a competitive choice for consumers, by stopping those who are trying to strangle it.

We’re looking intensely at a number of ways to do that. We’re encouraged that the Department of Justice forced the group I mentioned earlier to license the former Novell patents on fair terms, and that it’s looking into whether Microsoft and Apple acquired the Nortel patents for anti-competitive means. We’re also looking at other ways to reduce the anti-competitive threats against Android by strengthening our own patent portfolio. Unless we act, consumers could face rising costs for Android devices — and fewer choices for their next phone.