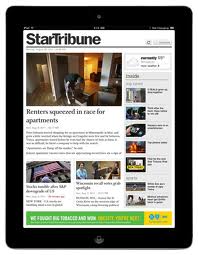 From the “I would be shocked if it was successful” department (literally – a quote from one of the execs near the situation), comes news from CNN that Tribune Company is exploring the idea of building a tablet that would compete against Apple’s iPad and tablets from other manufacturers.

Tribune owns a handful of major US daily newspapers, including the Chicago Tribune, Los Angeles Times and The Baltimore Sun, along with 23 television stations.

Tribune aims to offer the tablet for free, or at a highly subsidized price, to people who agree to sign up for extended subscriptions to one of its papers and possibly a wireless-data plan with a partner cellular carrier, said five people briefed on the project.

The report states that this is the pet project of Eddy Hartenstein, Tribune’s chief executive, and they are working with manufacturing partners which may include Samsung.

The Tribune has faced threat of bankruptcy woes in recent years but it is noteworthy that only 8% of the US currently has a tablet, perhaps leaving the door open for other players.

Another suggestion: Subsidized iPad with subscription?