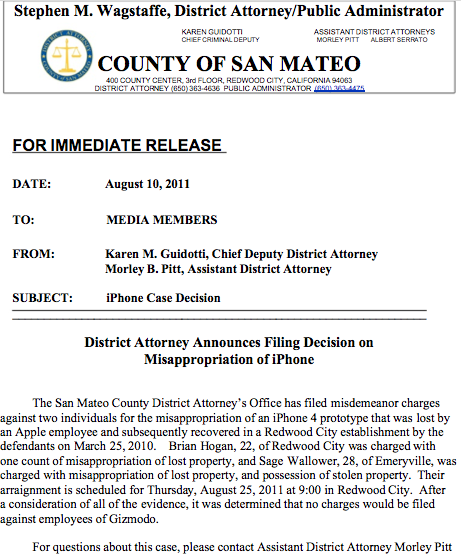 A year and a half after the whole “Gizmodo buys a lost iPhone 4” case, the San Mateo District attorney levied a decision in the matter.

The San Mateo County District Attorney’s Office has filed misdemeanor charges against two individuals for the misappropriation of an iPhone 4 prototype that was lost by an Apple employee and subsequently recovered in a Redwood City establishment by the defendants on March 25, 2010. Brian Hogan, 22, of Redwood City was charged with one count of misappropriation of lost property, and Sage Wallower, 28, of Emeryville, was charged with misappropriation of lost property, and possession of stolen property. Their arraignment is scheduled for Thursday, August 25, 2011 at 9:00 in Redwood City. After a consideration of all of the evidence, it was determined that no charges would be filed against employees of Gizmodo.

Interesting that they use the terms “misappropriation of lost property”. Perhaps the statements about “stolen” were premature and inappropriate.

Gawker/Gizmodo had this to say:

We are pleased that the District Attorney of San Mateo County, Steven Wagstaffe, has decided, upon review of all of the evidence, that no crime was committed by the Gizmodo team in relation to its reporting on the iPhone 4 prototype last year. While we have always believed that we were acting fully within the law, it has inevitably been stressful for the editor concerned, Jason Chen, and we are glad that we can finally put this matter behind us.

We’re interested to hear what Apple has to say on the matter and of course have reached out.

The penalties for violating CA Penal Code 485 PC are defined as up to a year in county jail and a $1,000 fine.