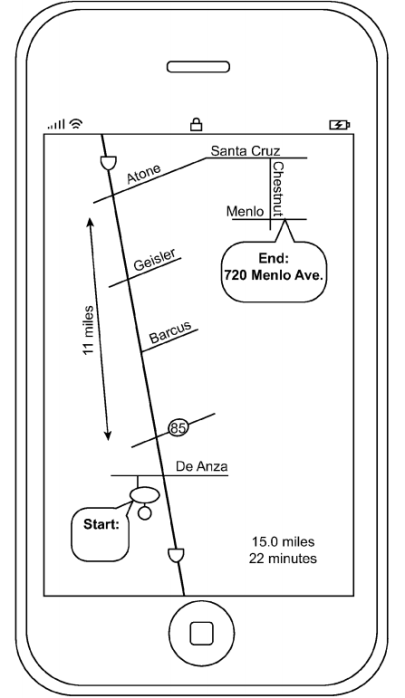 In a report from Computerworld way back in 2009, we learned that Apple had quietly acquired Maps API company Placebase. Then, founder of Placebase and CEO, Jaron Waldman, started working at Apple on a new “Geo Team”, presumably helping to integrate Placebase mapping technologies into future Apple products.

Essentially the patent describes new methods of modifying a map in order to highlight certain objects by distorting others. For example, Apple could provide more data to the user (especially those on smaller screens) by blurring useless data and highlighting what it predicts is most useful to the user at any given time. You can imagine this being particularly useful for navigation. If a user were to request directions to a specific location, the maps could dynamically blur data that isn’t helpful and modify objects or landmarks that would otherwise be difficult to locate.

A snippet from the patent summary explains:

The following relates to preparing and presenting schematic maps, which are maps that present information in a format that presents only information that is most relevant to a given situation in order to provide a simple and clear representation sufficient to aid a user in guidance or orientation. The schematic maps as described herein can be formatted based on the attributes of a display on which they are presented so that the map layout and presentation can be optimized for the particular display. The schematic maps can be “distorted” to better illustrate important maps areas in greater detail and using a relatively larger display area while deemphasizing less important map areas by illustrating them in less detail and using a relatively smaller display area, and thus the schematic maps can be devoid of adherence to a particular scale.

There was originally speculation that Apple might be acquiring Placebase in order to build their own native Maps application, rather than having to rely on Google Maps. With the patent wars heating up and relationships between smartphone makers weakening, the likelihood of Apple not wanting to rely on their rivals for key technologies is increasing.