A few more interesting Apple Inc-filed patents have surfaced today (via Patently Apple) as part of the many applications published by the US Patent & Trademark Office recently. Perhaps the most notable include a design for an iPhone antenna clip, new finger reducing oil resistant coating, and a patent describing using solar energy as an alternate power source in portable devices (something we know Apple has been researching from patents and other sources in the past).

One of the more interesting patents with technology that could (and probably should) make its way to iOS devices in the near future is a the method of reducing “finger oils on touch surfaces”. The patent describes Apple’s method of “Direct Liquid Vaporization for Oleophobic Coatings”. Fingerprints have seem to become less of an issue to iPhone users over the years, but are definitely still a major annoyance to users in less than desirable lighting conditions.

Apple states that to prevent the deposition of oils on an electronic device surface, an oleophobic ingredient could be bonded to the electronic device surface. The oleophobic ingredient could be provided as part of a raw liquid material in one or more concentrations. To avoid adverse reactions due to exposure to air, heat, or humidity, the raw liquid material can be placed in a bottle purged with an inert gas during the manufacturing process.

The image below shows what appears to be an antenna attached to a small device’s housing via an “attachment member”. Patently Apple reports Apple states the antenna invention could be used in “their iPod family (MP3 players), a radio, an audio/video recorder, a mobile telephone, personal digital assistant, tablet computing device, or other similar device”. They also speculate from the “exploded view above that it might even be an “iPhone-nano-like device”. 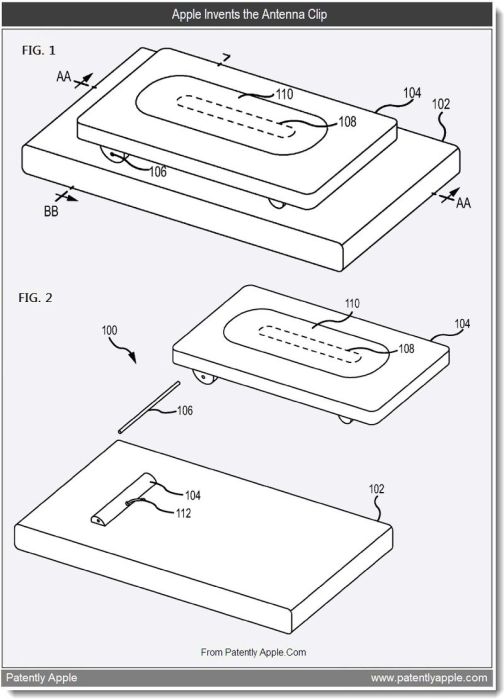