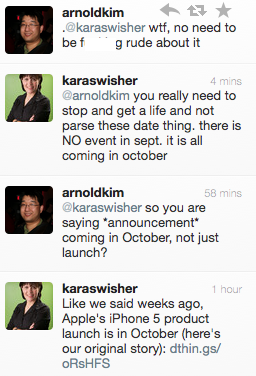 Kara Swisher, exactly one year to the day ago:

According to several sources, and as has been widely expected, Apple will once again be holding its annual autumn special event, closer to mid-September this time. Apple (AAPL), which has had a fall hello-there confab every year since 2005, waited until August 31 last year to announce its “Let’s Rock” event on September 9 at the Yerba Buena Center for the Arts Theater in San Francisco.

The event turned out to be on September 1st. – 9 days earlier, rather than later, than the previous year’s September 9th launch.

Bloomberg, a fairly reliable publication, also missed that one, but only by a week.

With that in mind, AllThingsD‘s Kara Swisher lashed out at bloggers belligerently this evening (right) saying the iPhone 5 event would be held in “Oc … to … ber”, not September as had been forecasted and then shot down earlier today.

She didn’t take kindly to attempts at clarification. She cited a previous AllThingsD report which said the iPhone 5 would launch in October.

For the record, we do believe that the iPhone 5 will launch in October.

At this point, it is a good to keep in mind that Apple’s release schedules are fairly fluid and any forecasting is dangerous because of unforeseen setbacks that can delay launches.

As a recent example close to our heart, Apple had originally scheduled the Lion/MacBook Air/Mac Mini/Thunderbolt Display for July 14th.  A late setback moved the launch a week later.  Even though the Thunderbolt Displays and other Lion materials accidentally still launched on the 14th, Apple alerted the media the day before the event that it would indeed be another week.

Apple alerted the media right away on this one so it does appear that September 7 is still a ways off.