Apple was this close to releasing a 3G MacBook Pro

It’s a glaring hole in Apple’s MacBook line: The ability to access 3G (4G?) networks without tethering or using a 3G hotspot. Apple CEO Steve Jobs told the USAToday in 2008 that the reason that he didn’t want to build that functionality into MacBooks was that it invited complexity and locked users into a carrier.

Air does not come with the built-in ability to connect to a speedy wireless data network run by various cellular carriers. Jobs told me last week that Apple considered it but that adding the capability would take up room and restrict consumers to a particular carrier. Through a USB modem, he says, you can still subscribe to wireless broadband with your favorite carrier.

When Jobs says “considered it”, this is what he means:

An Ebay auction today (via MacRumors) shows that Apple was getting ready to release such a MacBook Pro – all the way back in 2007. 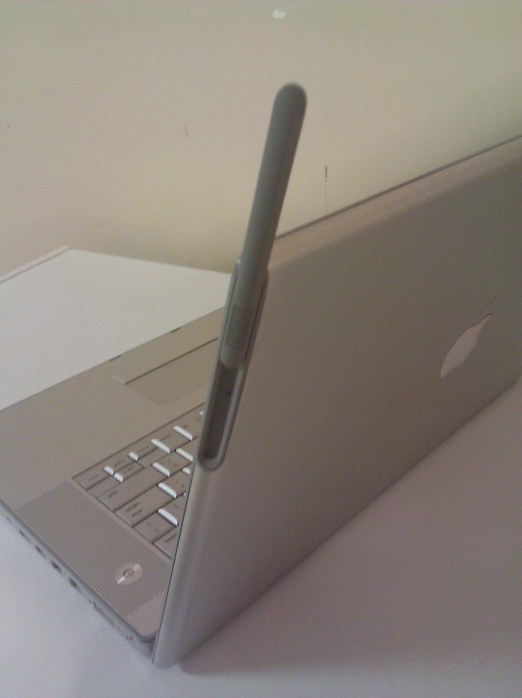 The prototype Santa Rosa MacBook Pro has a SIM card slot which is identified as a Dynastream ANT2USB card. In the US, that would have worked on T-Mobile or AT&T as well as many international GSM carriers. The seller originally bought it from a Craigslist ad as a non working machine for parts. Upon opening it, he realized that this was no ordinary MacBook Pro (if the huge antenna didn’t give it away!). He got the machine into working order (thought 3G is not tested) and is selling it as-is, “no guarantees”.

It isn’t certain why Apple never opted to go with a 3G option in any of its Macbooks. Perhaps the complexity and the numbers never made sense. Now that almost everyone carries a Personal Hotspot capable phone in their Pocket, it may not ever make sense.

Full Gallery and seller story below:

This laptop was originally purchased from Craigslist as a non-functional parts machine. Upon removing the top case it was immediately clear this was no normal Macbook Pro: the circuit boards inside were bright red as opposed to the normal blue! Further inspection found multiple differences from the stock version, most notably a feature never seen in a Macbook laptop of any kind: what appears to be a fully integrated cellular modem and SIM slot. There is an extendable cellular antenna located at the right top side of the display assembly (The antenna is marked with “Tyco Proto / #006” when slid out), and a standard size SIM card slot located underneath the memory cover on the bottom of the machine. The SIM card board is connected to the logic board via a connector not found on production machines. The solder footprint for it is still present on the production boards and not populated, which is interesting. This would seem to suggest that it was a last minute decision to remove the cellular functionality before going into mass production. The optical drive is marked as a “Sample for Evaluation”. Rather than a normal EMC Number the specifications lapel simply says “XXXX”, and the serial number does not show up in Apple’s online database. Rather than use the machine for parts I of course had to put the time into repairing it to its original condition and see what happened!

After repairing the original red logic board and adding RAM, a hard drive, and battery the machine was again fully functional. It installed the OS without any problems, and behaves as any other Apple machine. I have used and tested it extensively and everything seems to be in excellent working condition. It is installed with OS X 10.6.8 Snow Leopard, and as it identifies itself as a normal Macbook Pro it should also run Lion without issue. Physically the machine is in surprisingly good condition, though it does have normal signs of wear from being used (minor scuffing and scratches, etc). There are no major dents or dings or scratches and from the outside the only thing that distinguishes it from a normal Macbook Pro is the antenna. Please note that the hard drive, battery, ram, and Magsafe adapter are not the original ones that came with the machine, as I received it without them present. The battery is third party rather than Apple original, though identical in form and function. It holds excellent charge. The hard drive and ram were purchased brand new for this machine.

The biggest question of course is the cell network data functionality. I have unfortunately been unable to get it working with my SIM card, though it is seen by the operating system and recognized as a modem device usable to connect to the internet with various configuration options. It is entirely possible it can be made to work by someone with more software and driver experience than myself but I can make no guarantees. It could be that there was an additional board originally that was not included with this machine, or that Apple could not work out a contract with a carrier for data service (Perhaps AT&T did not want something sure to be a bandwidth hog on its network), or simply that no driver exists. There are too many unknowns . . . . it is entirely possible it never worked, and there is no way to know without finding someone directly involved in the development of the hardware and not under an NDA. According to the seller (whom I contacted again after realizing what the machine was) he used to work as an engineer at Apple and received the machine for software development work. He was allowed to keep it when he left, and since had used it as a personal machine until it stopped functioning and he sold it to me. He says that he never personally saw the cellular data functionality working and does not know any more about it, as it was not related to his work. All my conclusions are solely speculation based on the hardware present and OS response and should not be taken as fact.