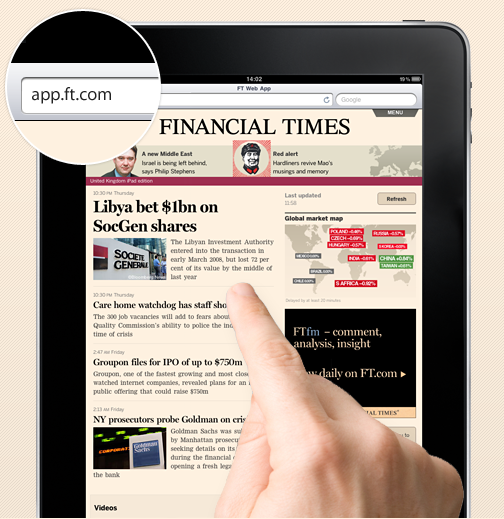 The Financial Times has officially been removed from the App Store after failing to comply with Apple’s in-app subscription model that requires payments to be processed through iTunes (giving Apple a 30% cut in the process).

The publication used to have an iPhone and iPad app, which appear to have been removed from the App Store today. Fortunately for FT (not so much for Apple), they also have an HTML5 web app alternative that they’re urging iOS users to use instead.

“We are directing readers to the FT‘s new web app available at app.ft.com.  iTunes will remain an important channel for new and existing advertising based apps.”

This isn’t the first time we’ve seen companies bypassing App Store policies by offering iPad compatible web apps. In fact, many companies even seem to be taking that route due to benefits of being able to develop one app for multiple platforms, rather than just dodging Apple’s rev sharing model.

In a report from Paid Content a few weeks before today’s decision to remove the app, Financial Times chief executive John Ridding described their relationship with Apple regarding the situation:

“We’ve had a series of very cordial conversations with Apple about how we see the world and how they see the world. We can each see where each other is coming from. That’s fine; you can’t always agree on everything. They fully understand what we would need to continue.”

That story also noted the iPad provided 15 precent of new Financial Times subscriptions, making it the largest contributor to their digital growth. It will be interesting to see how many more publications follow suit and start readying their web apps for Apple’s next big policy revision.