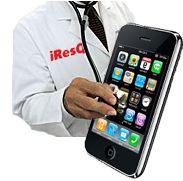 France-based Hardmac reports that Apple is readying a remote iOS device testing tool for deployment to its service personell.  It is web based and will send the diagnostic information, relatively anonymously, to Apple technicians.  A tool of this sort is already in use by Apple technicians but Hardmac claims that this once can be used remotely.

Apple announced (internally) that they have put the final touch to the tools that will facilitate a diagnostic. It will be simple to use and can be used remotely.  In effect, this systems operates entirely online.  An email is sent to the device containing a URL (this can also be entered by hand) and the device will connect via Mobile Safari and the telephone to start internal checks and sends the result of it to the Apple servers to which the service centres are connected.

This would be a pretty clever and powerful tool to do basic diagnostics on iOS devices which could help technicians diagnose and fix  device problems over the phone, saving both the customers and Apple time and effort. Obviously, the diagnostics would only work on devices that were booting up and running Mobile Safari -which isn’t the case in most device repair situations.  The test can only identify the following information:

The tools should be available in the coming months and Hardmac doesn’t speculate whether the test will be able to detect if a device is jailbroken.