Macworld: for simple tasks, a decked out Mini beats a base iMac handily (or SSDs rule) 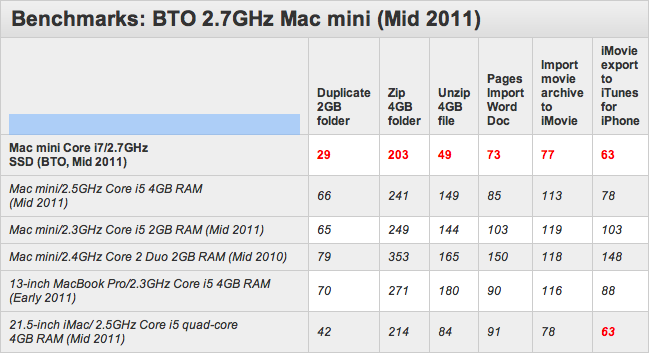 Macworld decided to put a decked out Mac Mini Mid-2011 against a current baseline iMac 2.5GHz to see what kind of performance could be gotten from Apple’s diminutive little machine when an SSD is added.

The results are pretty apparent: when running simple tests, especially ones that rely only on CPU and disk access, the Mini beat the iMac handily (above). That’s almost entirely due to the added speed of the SSD compared with the iMac’s 3.5-inch HDD. When doing more graphics intensive tests (below), the iMac and its more powerful GPU took over.

The takeaway on this however is that a HDD to SSD upgrade can make a heck of a lot of difference in performance. For those handy out there, adding an SSD to a Mac Mini doesn’t have to be a $600 proposition either. Reasonable SSDs can start out at $100 and can be added to the new Minis’ hard drive configuration (not swapped) with a simple kit.

Another important tweak not detailled in these tests is adding 8GB of RAM to the Mini which will run you somewhere south of $40. Added RAM really improves performance when lots of windows or applications are open at the same time. 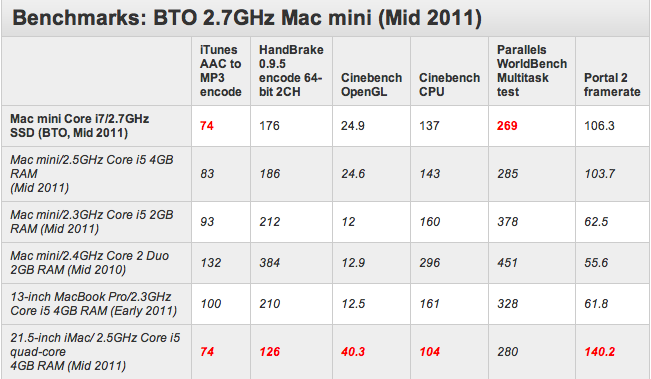