Parallels updated their Windows virtualization software for Mac to version 7 today with some exciting new features and optimizations. Lion compatibility has been improved (Full Screen mode, Launch Pad, and Mission Control) as well as speed: It is 60 percent faster than Parallels Desktop 6 when resuming Windows and up to 45 percent faster for 3D graphics. You can also share the iSight camera with Windows apps as well. 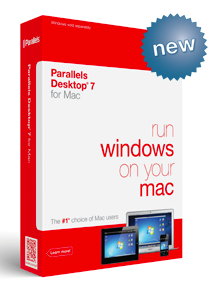 Perhaps most interestingly, you can now run another instance of Mac OS X. This might be a life-saver for Quicken users or users of other Rosetta apps that aren’t Lion compatible. Also, Mac developers can test their apps in different OSX versions with another OS instance.

Finally, there is a a new app (free for a limited time) which improves connectivity and allows full Flash sound and video on iOS devices.

Enjoy the best performance on the market

New! Lion integration and support, including Launchpad and Mission Control for Windows programs New! Shared iSight and FaceTime HD cameras in both Windows and Mac applications New! Lion as a guest OS Enhanced! Up to 1 GB of video memory, for ultra-high resolutions and maximum quality settings Enhanced! With the new Parallels Mobile App, copy-and-paste, enjoy audio, and access your Mac and Windows programs with your iPad, iPhone or iPod touch.

Run thousands of Windows applications at lightning speed on your Mac

Enhanced! Increased graphics performance: up to 45% faster for 3D graphics compared to previous versions Enhanced! Start, stop and resume Windows more quickly, as much as 60 %, every time you launch Windows Enhanced! When copying files within Windows, Parallels Desktop 7 outperforms its competitor by 120 %

Launch Pad, Full Screen and other supported Lion features plus 90 enhancements make the No. 1 selling and best performing software for running Windows on Macs better than ever

Renton, WA. September 1, 2011 – Parallels® today announced the September 6 availability of Parallels Desktop® 7 for Mac (www.parallels.com/desktop/seven), the fastest, most intuitive and immersive version yet of the No. 1 selling software for running Windows and Mac applications side-by-side on a Mac without rebooting. Over three million current Parallels Desktop users can upgrade to Parallels Desktop 7 starting today. More than 90 new and enhanced features in Parallels Desktop 7 include Mac OS® X Lion integration, performance boosts and a powerful new Parallels Mobile app and My Parallels services platform for iPad, iPhone and iPod touch devices. Parallels Desktop 7 is packed with features most desired by users, extending its lead as the best solution for businesses and consumers worldwide.

“As Macs have become more popular than ever, a growing number of Mac users, including enterprises, find they need to run critical Windows programs on their Macs. Parallels Desktop 7 for Mac lets you run popular apps like Windows Internet Explorer, Access, OneNote, Quicken and more, even the most demanding graphical programs, without rebooting and without compromise on speed and usability. Run Windows applications like they were made for your Mac,” said Parallels CEO Birger Steen. “The people have spoken and Parallels listened to make the best even better. Whether you’re a business, individual or student, Parallels Desktop 7 gives you the best Windows on Mac performance plus mobility from any iPad, iPhone or iPod touch.”

According to results from more than 4,000 benchmark tests conducted by independent publisher MacTech, Parallels Desktop 6 for Mac outperformed its closest competitor in 92 percent of 3D graphics tests and 84 percent of general performance tests.[1] Parallels Desktop 7 performance is even faster. It outpaces its competitor by 120 percent when copying files within Windows, and 40 percent when starting and resuming Windows, according to testing conducted by Parallels. It is also 60 percent faster than Parallels Desktop 6 for resuming Windows and up to 45 percent faster for 3D graphics in some applications.

Parallels Desktop 7 delivers the most immersive and integrated Windows on Mac experience ever so customers can enjoy the full benefits of the Mac hardware they love. Highlights include:

For people who want to switch from PC to Mac, Parallels also announced the availability of Parallels Desktop 7 Switch to Mac Edition™, which includes Parallels Desktop 7 plus Parallels High Speed USB transfer cable, as well as almost two hours of video tutorials that make it easy to learn how to use your new Mac.

Parallels Desktop 7 for Mac Enterprise Edition (www.parallels.com/desktop/enterprise) empowers businesses and IT departments to support Windows based business applications for Mac users with a configurable, policy-compliant solution that easily fits into existing business processes and helps reduce the cost of deploying and maintaining client-based software.

Today Parallels also separately announced (www.parallels.com/press) the new Parallels Mobile app with My Parallels service for iPad, iPhone and iPod touch devices works with Parallels Desktop 7 and is for sale in the App Store on (or shortly after) September 1. The new Parallels Mobile app lets you remotely access and control both your Mac and Windows applications, and files from anywhere. Its new Windows features include audio support for Flash and the ability to copy and paste text between Windows programs on your Mac and your Apple mobile devices. Details are available at www.parallels.com/mobile.

Parallels Desktop 7 has more than 90 new and improved features including:

Availability and Pricing Parallels Desktop 7 for Mac is available today as an upgrade for current Parallels Desktop users. It will be available to the general public, both a downloadable version and packaged software for delivery, fromwww.parallels.com starting on September 6. Packaged software will also be available starting September 6 at Apple retail stores, Apple.com, Amazon.com, Best Buy, Fry’s Electronics, MicroCenter and hundreds of other retail locations nationwide.

A free trial of Parallels Desktop 7 for Mac is available starting September 6, along with in-depth information, videos and screenshots of the new features at www.parallels.com/desktop/seven.

Parallels is a global leader in hosting and cloud services enablement and desktop virtualization. Founded in 1999, Parallels is a fast-growing company with more than 800 employees in North America, Europe and Asia. For more information, please visit www.parallels.com, follow us on Twitter at www.twitter.com/ParallelsMac and Like us on Facebook atwww.facebook.com/ParallelsDesktop.

Enjoy Flash videos and audio from Windows on your Mac anywhere via iPad, iPhone and iPod touch devices

Renton, WA. September 1, 2011 – Parallels® today announced the new Parallels Mobile app with My Parallels service for iPad, iPhone and iPod touch (www.parallels.com/mobile). The new app is being released in conjunction with Parallels Desktop® 7 for Mac, also announced today (www.parallels.com/press) to give users complete anytime anywhere control of their Mac, including OS X Lion and Windows, plus all of their applications, files and data. Parallels Mobile also works with Parallels Desktop 7 to make Flash video and audio available from Windows on your Mac anywhere via an iPad and Apple mobile devices for the most productive and immersive mobile experience.

The new Parallels Mobile is a premium app that provides Parallels Desktop 7 users a fast, fully immersive mobile experience including:[3]

The new Parallels Mobile app empowers people to easily perform tasks via their iPad, iPhone and iPod touch that have been unavailable or challenging, such as printing, viewing Flash-based websites and full use of productivity applications like Outlook and Quicken.

“People are increasingly mobile and need to be able to work, get their studying done and enjoy their entertainment on the go. Parallels Mobile gives people the freedom to live a mobile life without compromising their ability to do the things they need to do from wherever they are and whenever they want,” said Parallels Vice President of Marketing, Kim Johnston.

Parallels Desktop® 7 for Mac (www.parallels.com/desktop/seven) is the fastest and most intuitive version yet of the No. 1 selling software for running Windows and Mac applications side-by-side on a Mac without rebooting. It is ideal for people who want or need to Windows programs such as Windows Internet Explorer, Access, OneNote, Quicken and numerous other corporate, educational and consumer programs, including the most graphically demanding applications and video games.

[3] Parallels Desktop 7 for Mac required for full functionality of these features.