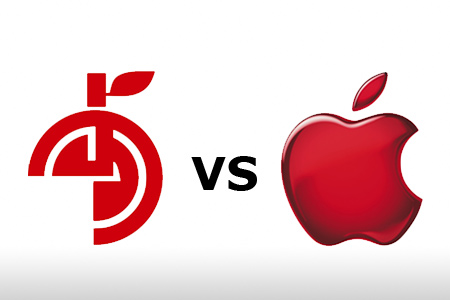 The image on the left (above) is the logo of Sichuan China-based food company Sichuan Fangguo Food Co., Ltd. It’s also the logo that Apple claims infringes on trademarks related to it’s own iconic Apple logo, according to a report from go chengdoo. (We cant help but feel that it looks more like an Apple logo merged with elements of LG’s logo)

“There’s a leaf so you can tell it’s an apple, but it also contains two Chinese characters. … The orientation is also different, and ours is a totally different shape … .” Besides, he added, “When I started Fangguo, I had never even heard of Apple.”

The company claims to have received a letter on July 19 from Beijing Zhucheng Law on behalf of Apple that gave the company until August 6th to respond to complaints regarding the resemblance of their logo to Apple’s. This was two days before Fangguo’s logo registration application was to be extended. The trademark registration license currently extends to August 19, 2017.

The real issue here is that Fangguo recently filed to extend their trademark into new product categories, two of which included “notebook computers” and “electronic-game software”. This is most likely what put the company on Apple’s radar and prompted them to send the letter. Go chengdoo also reports that a lawyer from Beijing Zhucheng Law claims Apple only wants the company to remove the “apple leaf” from their logo and make its trademark in technology related categories void.

The CEO of Fangguo, Zhao Yi, doesn’t seem to concerned:

“I’m Fangguo, it’s a fruit, if the leaf is removed, it’ll just look like a bomb.” [Truth in advertising?] He added, “Anyway, the law firm who sent the letter hasn’t contacted me since they sent it.”

Fangguo’s logo was apparently originally created in the 1980s and was meant to symbolize an Apple (or more broadly, fruit in general), due to the company’s food business and the Nanchong-based design firm which created it (apparently Nanchong is known for its fruit).

As an aside, Apple, Inc had to pay UK-based Apple records a significant fee when it went into the music business.

In case your wondering, according to Zhao Yi, Fangguo never had specific plans to enter the computer business, but only filed to broaden the categories for it’s trademark in the event an opportunity would present itself. He also notes some of his family members use Apple products. However that hasn’t stopped him from trying to make a case against Apple’s claims…

Apparently Zhao Yi has created 1,000 questionnaires for attendees of the Fourth China Trademark Convention, asking them their opinion on Apple’s claims and whether or not the two logos resemble one another. The research is in preparation of the company’s response to Apple and will be handed out at the Chengu Century City Exhibition Center where the convention is opening today.