Microsoft steals the “Wait ’til next year” strategy from the Cubs 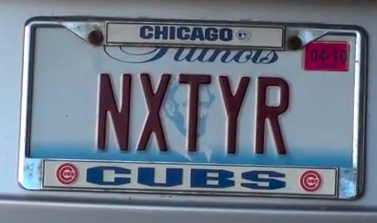 Today was Microsoft’s Windows Tablet 8 unveiling.  The product on the surface looks cool, people are hyped, but alas it will be a year before real products are given to real people.  The iPad 3 with its Retina Display will have been on the market for months and Google will have iterated 10,000 Beta releases of Android before then on 200 different pieces of tablet hardware.

On top of that, this new OS is really just smashing together Windows Phone 7 Metro UI Windowing (some admittedly nice UI features) with Windows 7 applications.  Real world use of Windows 7 apps in tablet form isn’t going to be fun.  I’ve tried using Windows on the Parallels iPad app – and it is OK in a pinch, but apps need to be redesigned 100% to work in tablet mode effectively.  Try entering data into Excel on a tablet for instance.  Then try Numbers on an iPad – it is slightly better.

Luckily, just about every iOS app was designed or redesigned first for touch over the past four years.  Microsoft is, today, telling its developers to do the same for their Windows apps.

How long can Microsoft keep up its “next year” strategy?  Windows 8 tablet isn’t the only thing coming “Next Year”.

Two years ago, Microsoft made the decision to scrap Windows Mobile and said: “Next year we’ll have Windows Phone 7”.  When Windows Phone didn’t grab much attention at the end of last year, Microsoft ‘bought Nokia’ and said, by the end of this year we’ll have some top quality phones from Nokia.  We’re waiting to see how that pans out, but by the time Nokia can produce anything with a Windows logo on it, it will have fallen from #1 in the world in smartphones to #4 or #5 behind Apple, Samsung and probably HTC and RIM.  But Windows Mango devices are coming to AT&T, have you heard?

How did this “wait until next year” thing become business as usual for Microsoft?

Microsoft, since the 90s, has had total control of computer operating systems.  When the Internet become important in the late 90s it had years to steer the ship towards defeating Netscape with Internet Explorer and putting Exchange/Outlook in every business.  It took years but they beat everyone to own the Net.

As recently as Vista, Microsoft promised a fix in a year (or so) and wasn’t trounced by the competitors while it got its act together and put out an improved Windows 7.  Microsoft was too firmly entrenched in the desktop market to get knocked off by being slow and having some substandard products.

Microsoft can no longer afford the slip ups.  Things move too quickly now and with apps in the Cloud and many different OS choices, Microsoft has to compete on merit.  Updates can’t happen in a year or two..or three – Windows 8 started in 2010.  Here’s a slide from the leaked Windows 8 thinking in June 2010: 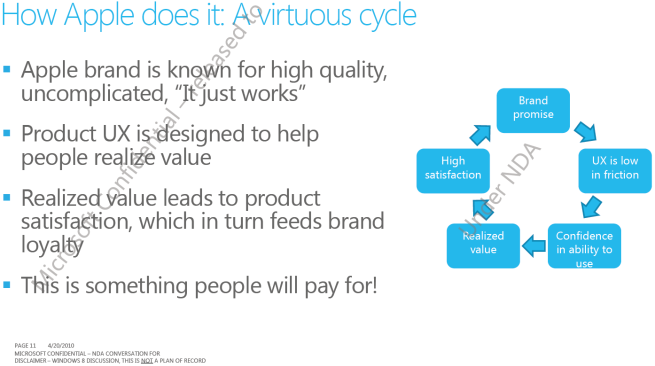 Apple sees the need for an App Store and it happens in months.  Google could probably copy Windows 8 before Microsoft could release a final product. The landscape is changing so fast that companies like RIM, Nokia/Symbian, Palm, and Microsoft, who’ve been around for a decade, can’t keep up.  It isn’t in their DNA.

The only reason that Microsoft is still around in mobile is because it has a fortune to dump into “next year”.  But the other shoe is going to drop at some point.  PC sales are flat and Office/Server products are moving into the Cloud.  Shareholders are a lot less forgiving than Cubs fans. 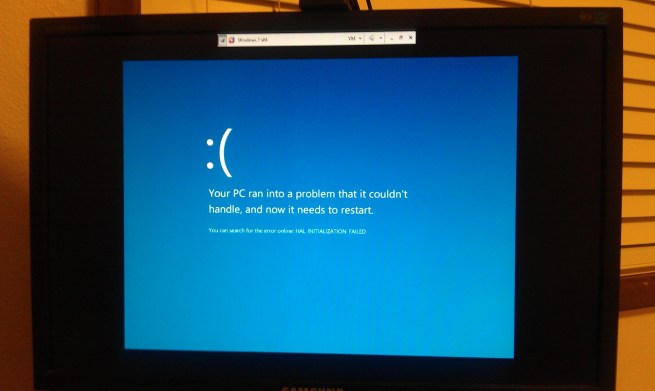