Could Apple have plans to integrate iMessage, the new all-in-one messaging app in iOS 5, into OS Lion’s iChat, an app that is indeed in need of desperate attention? Perhaps.

The evidence comes from a developer who provided the following hints found in iChat’s framework in Lion. Of course it is only speculation at this point, but MacRumors guesses these elements have been added to provide cross-platform support for the iMessage protocol in iChat. 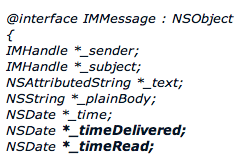 Buried in the framework of OS X Lion’s iChat, are two new properties – The “timeDelivered” and “timeRead’ fields that indicate the tracking of delivery and read receipts for instant messages. These features, however, are not supported in any of iChat’s native messaging protocols, while the same features are offered in Apple’s iMessage protocol. These properties were also not present in previous versions of iChat prior to OS X Lion.

While nothing in the evidence seems to indicate this will happen anytime soon, it wouldn’t be the first time Apple provided native cross-compatibility for messaging between iOS devices and OS X. Of course it would also make sense to integrate their many currently fragmented messaging services into one home, much like iMessage aims to do with instant messaging and SMS in iOS 5. Earlier in the year they made FaceTime available for OS X via the Mac App Store, creating cross-compatibility with the same service on iOS. It wouldn’t be much of a stretch to imagine FaceTime and iChat becoming one, potentially even rebranded as an iMessage for OS X.
00