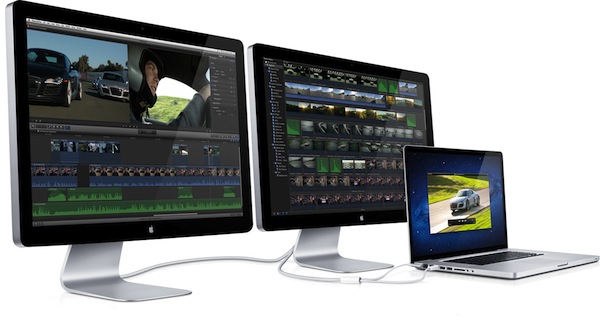 Nearly every current Mac model is able to support two Thunderbolt displays. The exceptions are the 13-inch MacBook Air (mid 2011), which only supports one, and the 13-inch MacBook Pro which supports two, but disables the device’s main display to do so. Also of note, the $800 Mac mini can support three Thunderbolt displays thanks to the AMD graphics and its HDMI port.

One other somewhat surprising limitation of the new displays is the inability to daisy chain a Mini DisplayPort screen off the new Thunderbolt display. The support document explains:

“Mini DisplayPort displays will not light up if connected to the Thunderbolt port on an Apple Thunderbolt Display (27-inch).”

Another support document outlines an issue with the F8 key when using Windows and a keyboard connected to the USB port on the Thunderbolt display. The key is apparently not supported by Windows when trying to accept the Terms and Conditions agreement and won’t allow you to enter Safe Mode. Luckily, the document outlines a temporary fix:

“To restore the use of the F8 key, connect your USB keyboard directly to the computer’s USB port.”