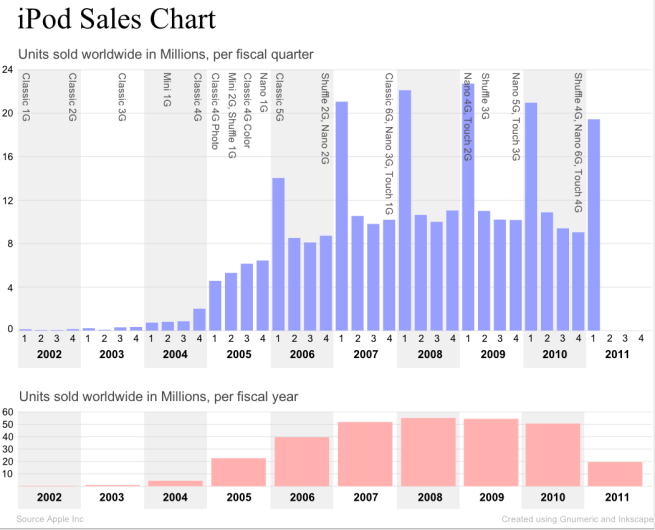 In a story that mirrors the ‘Killing of the iPod’ speculation post we did a few weeks ago, TUAW posts that the iPod shuffle and classic are heading out to pasture as Apple focuses on the iPod touch and iPod nano.

If you want to buy an iPod shuffle or iPod classic from Apple, you should do it sooner rather than later. We’ve heard those two iPods are getting the axe this year.

The idea is that Apple wants to focus on touch screen devices that have some innovation left in them. Saving some serious time and effort, here is what we wrote two weeks ago: 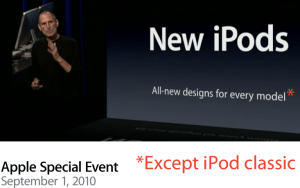 The iPod classic’s writing is on the wall. Literally->. At the iPod event last year, Steve Jobs said that they were redesigning “every model” of iPod. Yet the iPod classic didn’t even get a spec update (R&D=null). With the release of iCloud and Wi-Fi synching, the classic becomes even more of a relic. So the classic is the easiest to do away with. Apple is probably just selling through last year’s stock at this point.

The shuffle’s strength is its price tag. You can get into Apple’s music ecosystem for just $49. However, with Apple rumored to be offering a low-priced iPhone that could end up free with a carrier subsidy, that’s pretty much a moot point. Especially since if you are an Apple user, you’ll likely have an iPhone.

But Apple is just one generation into the new nano OS and there is still significant potential there. Apple scrapped the Portal Player derived OS last year when it went to the pared down touch-OS based nano, but it also killed the ability to make and watch video among other significant cuts. This device isn’t really an iPod as much as it is a wearable controller.

So where does Apple go from here? I’ve detailled what I think the nano can become with the addition of Bluetooth here but its worth watching the videos of the landscape again.