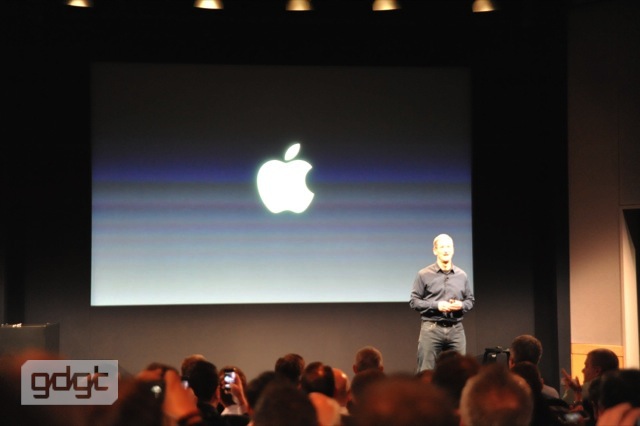 Find below coverage that we’ll be pulling in live from around the web. You can find a roundup of our predictions here as well as a few last minute whispers here. The Liveblog post is sticky at the top and newer posts are below.

Event is over, Archive is below

9PT: We’ve got an hour to go and the Store’s gone down. Not just for new iPhones but something that isn’t reported as much: iPod price drops. And other stuff hopefully.

9:30 Looks like the iPhone 4S has arrived in Japan a little early…with an October 14th release date and 30% price drop. Sounds familiar.

9:50 Everyone going in, sitting down…this is getting exciting… (More Stones, less Beatles and Dylan. Just sayin’).

“Good morning, this is my first product launch since being named CEO.”

Apple Town Hall is Where the iPod was announced 10 years ago.

Reviewing Apple Stores in China (has issues with slides).

10:05: Shanghai store opened with 100K visitors in a weekend. That is a good month for the Los Angeles Store. Hong Kong store sold record amount of Macs on opening.

Video over Stats: 357 total stores in 11 countries, MANY more are coming to “raise the bar at retail.”

MacBook Air: Competitors are trying (and Failing) to copy it.

MacBook Pro and iMac are the #1 best selling notebook and desktop in the US! Mac outgrew PC almost 6X and has outpaced PCs for every quarter for 5 years.

“Only 10 years ago we launched iPod on this very stage. Since then 300m iPods have been around the world.” Last year 45 million. In context Sony sold 230M Walkman in 30 years.

Despite all of this momentum, we have 5% share of the overall market in handsets. More coming on the iPhone.

We think the iPad can change the way teachers teach and kids learn.

92% of the Fortune 500 companies are testing or deploying iPad.

3/4 tablets sold are ipads – is undisputed #1 tablet in the world (despite everyone trying to compete).

250Million iOS devices have been sold! 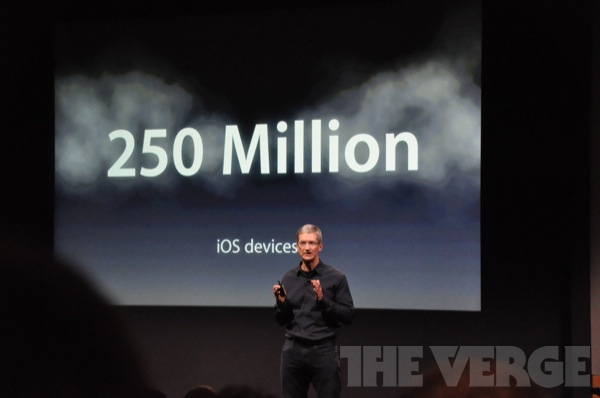 Apple has already paid out $3B to developers (and kept a billion ;) for their trouble).

18B Apps downloaded and 1B more every month.

Forstall demonstrating a new Cards app where you can make a card on your iOS device and Apple will (with the help of some third party no doubt) send it for you.

In the US, Apple will even send a push notification when it arrives (Apple revolutionizes tracking of physical letters?!) $2.99 in the US. 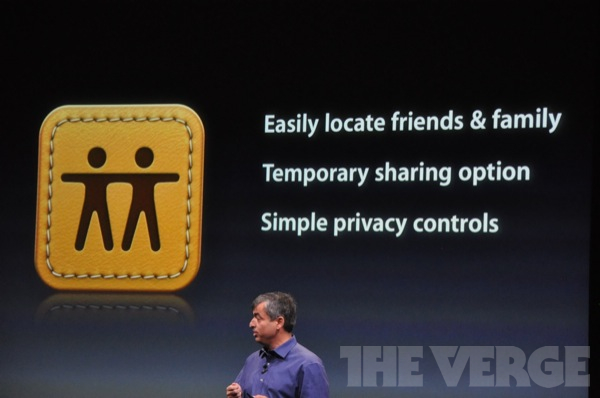 1:38: Eddie Cue (with Purple Shirt) to talk about iCloud. Explains how it works again. We know this. Yes, yes.

Find My Friends! We broke this (also broke Photostream – and everything else too). Pretty much just like we described. Google Latitude, eat your heart out (OK it is similar).

Talking about iPods…going over the old iPod nano…Fitness…Right out of the box, the new nano lets you track your runs. 16 new clock faces. Bigger icons (seem to take up whole screen). 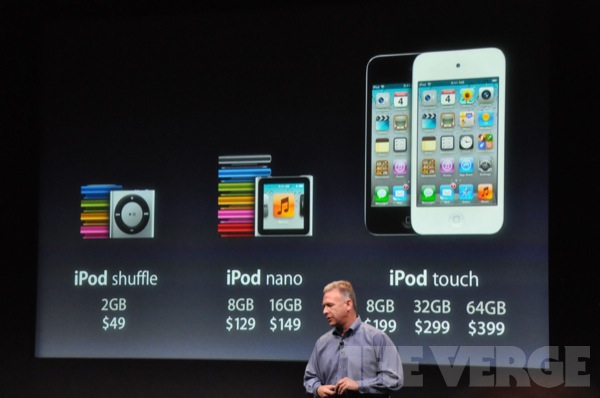 Ugh, that was a pretty small update.

Epic’s Mike Capp to show Unreal Engine, Infinity Blade “Like an Xbox in your pocket.”

Phil is back – increased battery life to 8 hours of talk time.

Camera: Better than other phones, in fact better than some point and shoots 8 megapixel sensor 3264×2448. More pixels!

Shows time to first photo. Androids get smoked. Phil says you have time to get coffee between shots on a Bionic. Ouchy?

“For decades technologists have teased us with this dream that we can talk to our technology. But it’s never come true! It’s such a let-down! What we really want to do is just talk to our device!”

Forstall: “I’ve been in the AI field a long time. This blows me away.”

Texts Phil Schiller about getting lunch from his voice.

Siri can read messages to you.

“This is blow-away. I just checked my calendar, scheduled a meeting, and got it all read back by Siri.”

It does calendars and reminders.

“Define mitosis.” Siri hits up Wolfram|Alpha and spits back a definition.

Ask Siri ‘who are you’? “I am your humble personal assistant.”

2:30 Phil back: Siri Does dictation – whenever you have a keyboard, you have Siri. English, French, and German.

Another demo video for the iPhone 4S.

International prices may vary. But will be out in 70 countries on 100 networks on launch.

Tim Cook is back: Review time. One more thing?