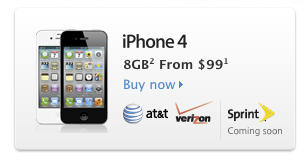 If you dont know by now, Apple has just wrapped up their iPhone media event and in the process of announcing the iPhone 4S, they also announced the iPhone would be coming to Sprint for the first time. This follows yesterday’s story that the carrier was committing to purchasing 30.5 million iPhones, a move that would see the company “lose money on the deal until 2014″.

“And for the first time… iPhone on Sprint.”