Update: Simon and Schuster have announced that the book will now be released on October 24th.

The WSJ reports that Steve Jobs and biographer Walter Isaacson knew that he was dying weeks before the end.

According to a person familiar with the matter, Isaacson last interviewed Jobs four weeks ago, right before, and right after he stepped down from his post as the CEO of Apple.

Jobs indicated at that time that he knew he was going to die soon. The scene will appear at the end of the book.

A few weeks ago, I visited Jobs for the last time in his Palo Alto, Calif., home. He had moved to a downstairs bedroom because he was too weak to go up and down stairs. He was curled up in some pain, but his mind was still sharp and his humor vibrant. We talked about his childhood, and he gave me some pictures of his father and family to use in my biography. As a writer, I was used to being detached, but I was hit by a wave of sadness as I tried to say goodbye. In order to mask my emotion, I asked the one question that was still puzzling me: Why had he been so eager, during close to 50 interviews and conversations over the course of two years, to open up so much for a book when he was usually so private? “I wanted my kids to know me,” he said. “I wasn’t always there for them, and I wanted them to know why and to understand what I did.”

In the wake of Jobs’ death, his biography has catapulted to the top of the Best Sellers list at Amazon. Also the “Movers and Shakers” top two is the bio and I, Steve: Steve Jobs in his own words.

Perhaps ironically (because I read almost everything on an iPad now), this might be the last hard cover book I ever buy. 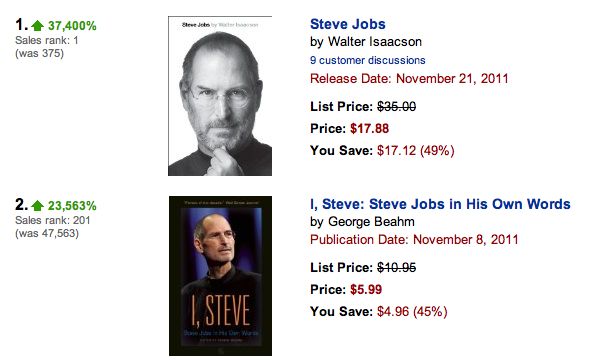