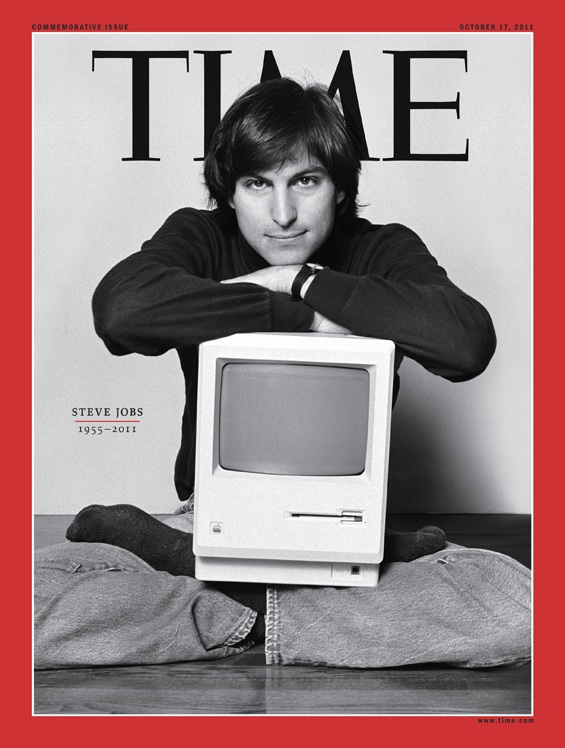 Time is doing a special run of its magazine this week.

To produce this special issue, TIME stopped the presses on its previously planned issue in order to devote its cover and 21 pages of the full issue to Jobs’ life and career. The issue includes a six-page essay by Jobs’ biographer Walter Isaacson, a historical report on Jobs career by TIME technology reporters Harry McCracken and Lev Grossman and a photo essay by Diana Walker, who has been shooting Jobs for TIME since 1982.

The cover image (right, click to enlarge) is a photograph of Jobs taken by Norman Seeff in 1984. This is the seventh time Jobs has appeared on the cover of TIME.

The magazine is increasing its print run for this special issue, which will be available worldwide.

Excerpt of Isaacson’s Essay below:

Jobs thus became the greatest business executive of our era, the one most certain to be remembered a century from now. History will place him in the pantheon right next to Thomas Edison and Henry Ford. More than anyone else of his time, he made products that were completely innovative, combining the beauty of poetry and the power of processors. With a ferocity that could make working with him as unsettling as it was inspiring, he also built what became, at least for a period this past month, the world’s most valuable company. And he was able to infuse into its genetic code the design sensibilities, perfectionism and imagination that make it likely to be, even decades from now, the company that thrives best at the intersection of artistry and technology.

In the early summer of 2004, I got a phone call from him. He had been scattershot friendly to me over the years, with occasional bursts of intensity, especially when he was launching a new product that he wanted on the cover of Time or featured on CNN, places where I’d worked. But now that I was no longer at either of those places, I hadn’t heard from him much. We talked a bit about the Aspen Institute, which I had recently joined, and I invited him to speak at our summer campus in Colorado. He’d be happy to come, he said, but not to be onstage. He wanted, instead, to take a walk so we could talk.

That seemed a bit odd. I didn’t yet know that taking a long walk was his preferred way to have a serious conversation. It turned out that he wanted me to write a biography of him. I had recently published one on Benjamin Franklin and was writing one about Albert Einstein, and my initial reaction was to wonder, half jokingly, whether he saw himself as the natural successor in that sequence. Because I assumed that he was still in the middle of an oscillating career that had many more ups and downs left, I demurred. Not now, I said. Maybe in a decade or two, when you retire.

But I later realized that he had called me just before he was going to be operated on for cancer for the first time. As I watched him battle that disease, with an awesome intensity combined with an astonishing emotional romanticism, I came to find him deeply compelling, and I realized how much his personality was ingrained in the products he created. His passions, demons, desires, artistry, devilry and obsession for control were integrally connected to his approach to business, so I decided to try to write his tale as a case study in creativity.