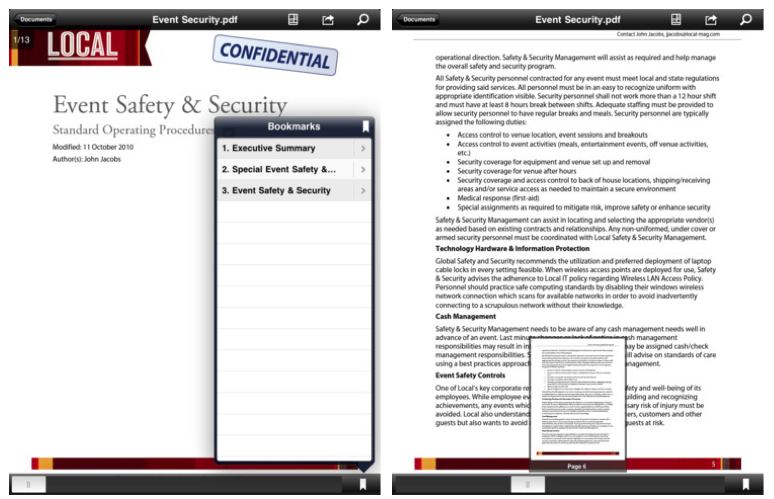 Adobe just took the wraps off the iOS version of Adobe Reader, which admittedly doesn’t bring much functionality we don’t already have with third-party apps. Either way it’s a welcome addition to their iOS app lineup and could possibly have the potential to be more than just a reader down the road.

The app allows you to read and share PDFs from your email, the web, or any other third-party app that supports “Open In”– pretty straight forward. Everything seems to work as advertised, although for some reason it just doesn’t feel as smooth as iBooks when zooming in and out.

It does however build in all the features you’d hope for including the ability to open encrypted PDFs, (supports up to AES256 encryption and LiveCycle Rights Management), the ability to search text, place bookmarks, and print using AirPrint. A nice addition is the single page mode allows you to tap the edge of a page to switch to the next, but the good old continuous scrolling will probably feel more at home on the iPad.

The iPad version looks a little more fine-tuned than the UI on the iPhone. Perhaps even fine-tuned enough to give iBooks a run for its money as your PDF viewer of choice.

Adobe Reader is available as a free download from the App Store now.

Instapaper also pushed out a huge update to their iOS app today. Instapaper Version 4.0 brings a complete UI redesign for iPad with a new grid layout with sidebar, redesigned black-and-white UI for iPhone, $1/month search subscriptions service as in-app purchase, iOS 5 support, and a ton of new features and UI elements that go along with the redesigns. Also expect many of issues you were having with previous versions to be fixed. For example, “Archive” and “Delete” options should behave as expected throughout the app.

If you use Instapaper, you are definitely going to have to take a few minutes to get used to all the changes, but once you do, you’ll realize just how great this update is.