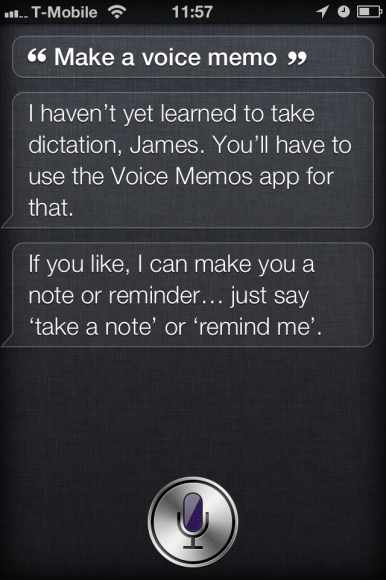 Since the release of the iPhone 4S, artificially intelligent Siri has amazed, surprised, and in some cases, disappointed when it comes to just how intelligent it is. While it seems to handle singing duets pretty well, many have pointed to issues with thick accents, lack of Maps and local service support in UK, and its ability to dial emergency services. Most of the time Siri understands what you’re saying, but if it doesn’t, it most often provides a simple response letting you know. However, when the guys over at Electricpig asked Siri to perform some tasks they knew it couldn’t, they came up with some interesting results:

As you can see in the image above, after asking Siri to “Make a voice memo”, it responded:

“I haven’t yet learned to take dictation, James. You’ll have to use the Voice Memos app for that.”

Obviously “yet” is the key word here. Could this be a hint at Apple’s plans to bring new features to Siri in future updates? Possibly incrementally through the cloud rather than waiting for a major iOS update? The guys also asked Siri a number of other similar questions from “Update my Facebook status” to “Send a tweet” and “Open in iTunes”. When they asked it to “Download an app”, Siri responded:

“I’m terribly sorry, James. I’m not allowed to download things onto your iPhone.” 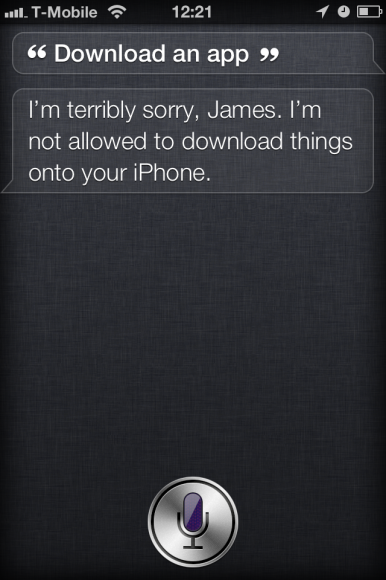