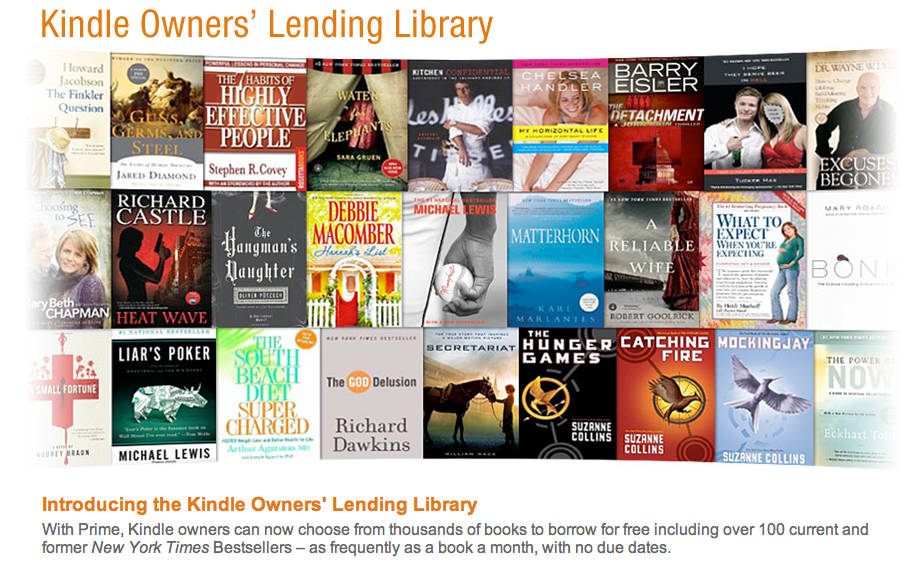 In a move that might drive more e-book-only tablet users to Amazon (opposed to iBooks or elsewhere), Amazon has announced a new book borrowing service called “Kindle Lending Library”.  The move is said to encourage Prime subscriptions, which are required for the service, but could be part of Amazon’s larger strategy as the $199 Kindle Fire prepares to enter the tablet market. Either way, Apple doesn’t seem to be too worried…

The service will allow users to borrow from a selection of approximately 5,000 books (up to one a month) that have been enabled for lending by the publisher. You’ll be able to return the book at any time without due dates, and bookmarks and highlights will be saved in the event you borrow or purchase the book in the future. Included in the available content will be 100 current and previous New York Times bestsellers.

Not so fast if you’re hoping to borrow books on your iPad or Mac, however. The service will only be made available to owners of an eligible Kindle device that are also Amazon Prime subscribers. A Prime membership is currently going for $79 per year, a pricey ask for just the book borrowing service if you’re not planning on taking advantage of the 10,000 movies and tv shows, and free two-day shipping available to Prime users. The good news is the $199 Kindle Fire will come bundled with one free month of Prime.

It appears Amazon hasn’t entirely convinced publishers of the long-term benefits of the service, as they note in the press release they are actually ” purchasing a title each time it is borrowed by a reader” to provide a “no-risk trial” for publishers:

“Titles in the Kindle Owners’ Lending Library come from a range of publishers under a variety of terms. For the vast majority of titles, Amazon has reached agreement with publishers to include titles for a fixed fee. In some cases, Amazon is purchasing a title each time it is borrowed by a reader under standard wholesale terms as a no-risk trial to demonstrate to publishers the incremental growth and revenue opportunity that this new service presents”

This is obviously a move to promote the Kindle Fire in anticipation of its November 15th launch, and yet another reason for Primes subscribers (those who mostly just want to read e-books anyway) to consider the 7-inch Amazon tablet over an iPad. Apple doesn’t appear to be bothered by Amazon’s push into the tablet market, however. Following a meeting with Apple CEO Tim Cook and CFO Peter Oppenheimer, analyst for Barclays Group Ben Reitzes says Apple isn’t worried about the Kindle Fire. In fact, they think it might be good news for iPad due to increased fragmentation among Android devices. Reitzes writes (via Business Insider):

“While the pricing at $199 looks disruptive for what seems to be the iPad’s most important rising challenge, the Amazon Fire – it is important to note that it could fuel further fragmentation in the tablet market—given it represents yet another platform. While compatible with Android, the Apps work with Amazon products. The more fragmentation, the better, says Apple, since that could drive more consumers to the stable Apple platform. We believe that Apple will get more aggressive on price with the iPad eventually but not compromise the product quality and experience.”