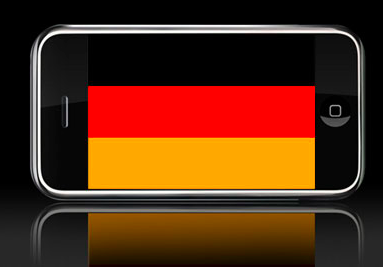 Florian Mueller isn’t a patent attorney but he plays one on his blog FOSSPatents.  For better or worse, he’s often quoted in the ongoing mobile technology patent battles where the winner is often Apple.  He’s also German so he probably understands this new, disturbing ruling a lot better than us (Our German is “rostig”)

Apple knows what it’s like to win injunctions against rivals. It won four of them against Samsung (two in Germany, one in the Netherlands and most recently one in Australia; all of them preliminary). Now it seems that Apple has just come out on the losing end of a patent infringement lawsuit. I have received a copy of what purports to be a default judgment by the Mannheim Regional Court barring Apple from selling in Germany — the single largest market in Europe — any mobile devices infringing on two Motorola Mobility patents and determining that Apple owes Motorola Mobility damages for past infringement since April 19, 2003.

If true, this would be a Hindenburg-sized backfire for Apple’s legal efforts in Europe.

The two patents and their US equivalents, Statements from Apple and Motorola and an update from Mueller below:

Update: It looks like Motorola is confirming the injunction with this press statement:

“As media and mobility continue to converge, Motorola Mobility’s patented technologies are increasingly important for innovation within the wireless and communications industries, for which Motorola Mobility has developed an industry leading intellectual property portfolio. We will continue to assert ourselves in the protection of these assets, while also ensuring that our technologies are widely available to end-users. We hope that we are able to resolve this matter, so we can focus on creating great innovations that benefit the industry.”

This is a procedural issue that has nothing to do with the merits of the case. This does not affect our ability to sell products or do business in Germany at this time.

Mueller notes in an email to 9to5Mac:

I have updated my blog post to comment on Motorola’s and Apple’s statements and on the claim that this is “totally symbolic” because it affects “only” Apple’s worldwide parent company, not the German subsidiary at this stage.

At the end of the updated post I list the three issues that this injunction raises regardless of whether or not it binds the German subsidiary directly:

1. Even Apple’s German website belongs to Cupertino, not to the German subsidiary, and Motorola could argue it’s an act of “offering” the products banned under the ruling.

2. In the German Galaxy Tab 10.1 case, Apple sued not only Samsung Germany but also Samsung Korea (a fact that played quite a role in that case). Apple and other right holders sue worldwide parent companies all the time. Nobody would do it if there were no point in it. It’s a very risky assumption that a worldwide parent company can’t be held responsible in any way for what its wholly-owned subsidiaries do.

In this overall context it’s important to consider that Apple says the ruling does not affect its business “at this time”. What does “at this time” mean? Until the German subsidiary runs out of supply? Until Motorola Mobility takes further action to enforce this? Maybe Apple will get a ruling on the actual merits of the case before there’s business impact. But that’s not clear.