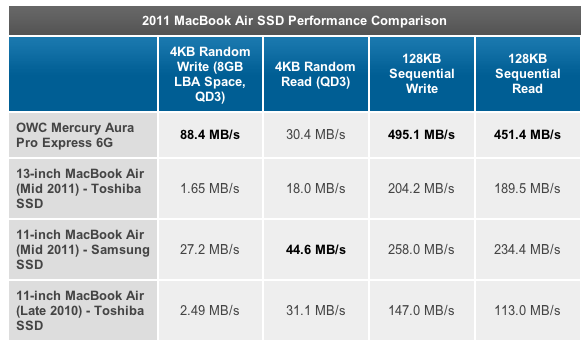 MacBook Airs ship with one of two models of SSD.  You either get a moderately fast Toshiba SSD or a significantly faster samsung drive with an updated controller. But for some, that’s not enough.

AnandTech breaks it down:

Performance is just staggering. The comparison is borderline unfair because both the Samsung and Toshiba controllers Apple uses in its MacBook Air are really a generation old at this point, while the Mercury Aura Pro Express is the absolute latest and greatest 6Gbps solution SandForce offers.

As you can see in the chart above, the 6G SSD offers a 4KB  88.4 MB/s write and 30.4 MB/s read speed, and 128KB sequential write speed of 495.1 MB/s and read speed of 451.4 MB/s. Sadly, the SSD packs a SandForce controller which requires more power, so using this SSD adds up to 5% to battery drain on the notebook, but with these speeds we think you’ll get over it.

OWC makes 6G SSD available in both a 120GB and 240GB version, costing $280 and $550 respectively. If you’re big into speed this might be for you.  For all the details check out AnandTech’s review.

So is the speed advantage noticeable day to day?  Want a bigger product? Read on:

The performance advantage is noticeable. The upgrade does make everything feel snappier, particularly compared to a MBA equipped with a Toshiba SSD. Large file transfers complete quicker and heavy multitasking workloads see an improvement as well.

Oh and a little surprise coming down the pipe:  A 480GB version is on the way according to this Amazon page. 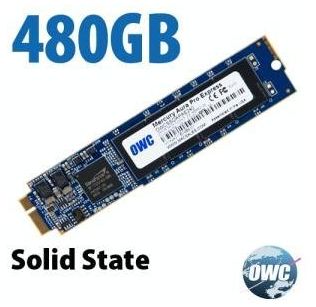