I was in New York City for a Samsung event focused on SSDs and gaming on PCs last month.  There wasn’t much in the way of new information, but Samsung gave me one of their SATA III 256GB 830 SSDs to try out.  These are within a few bytes per second of the fastest SATA3 SSDs money can buy, so I was pretty excited to get home and throw it in a Mac. 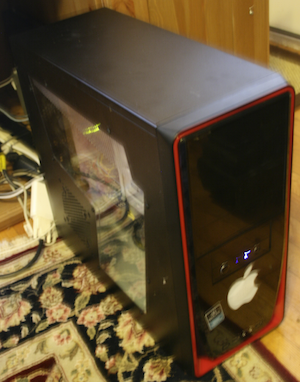 The problem is that I don’t have a worthy Mac to test it out on.  I’ve been using an Air as my exclusive machine for a year and my wife is tired of me testing stuff on her MacBook Pro.  We have a bunch of old Macs laying around the house but nothing with a SATA III connection.

Luckily, I’ve been in the market for a new Mac desktop since I replaced my MacBook Pro with an Air  last year, but to my surprise, I haven’t really found myself in need of one.  The Air drives my 30-inch display pretty well and most of my media has been offloaded to a Gigabit NAS.  Since I already have a 30-inch display, an iMac doesn’t really appeal to me.  Apple’s headless desktops don’t make sense in my situation either. A Mac Mini isn’t going to be much faster than my Air and the Mac Pro hasn’t been updated in over a year and doesn’t even have SATA 3 on board.

I also have some USB3 and eSATA peripherals that I get for testing and can’t use these products on standard Mac hardware.

I decided to give into temptation and build a Hackintosh…

Mind you, this wasn’t an attempt to build a machine for my daily use.  This is just a toy. Something to use for testing equipment I get for reviews while I write on my Air.  Plus, I had to put this fast SSD in something that can handle it –an older MacBook Pro wasn’t going to take advantage of the SATA3 speed.

At the recommendation of my Hackintosh-wielding friends, I decided to use one of TonyMacx86 Custo builds which have been tried and supported by the many forums members.  Seriously – If you are going to build a Hackintosh, head over to TonyMacx86.com.

Originally, I wanted to get in and out really simple and cheap with the $329 CustoMac Mini.  The ingredients are very basic but you are building a very modern, fast machine, with some expandability : 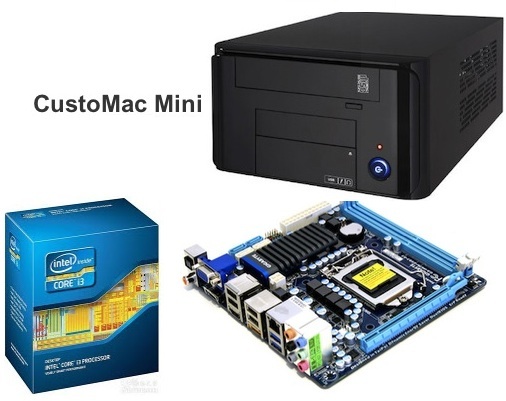 Yes, having the functional equivalent of a 8GB Mac Mini was only going to cost $329! I already had a drive and didn’t need a DVD Burner and I have purchased like 10 different copies of Snow Leopard and Lion. For those in need, here are some optionals components:

Unfortunately, the “Custo-Mini” wouldn’t support my 30″ display with Intel 3000 Graphics -it only had 2 HDMI ports and a VGA port.  The 250W power supply would probably fail on a decent video card as well.  Otherwise, this would have been perfect (and will likely be a great build for others who only need 1080P displays).  People on Tony’s forums have tried this with processors as fast as a Core i7-2600k with no problems.

My original objective was to have a lean mean machine.  But with the 30″ monitor obligation, I now had to go with a bigger Mobo and Power Supply and therefore opted for a bigger case.  Since I got a bigger motherboard, I opted to bump up my RAM to a whopping 16GB for $98.  I also opted for the fastest consumer CPU because this motherboard does easy overclocking.  This thing turned into a beast quick but the price of ingredients is still relatively low: 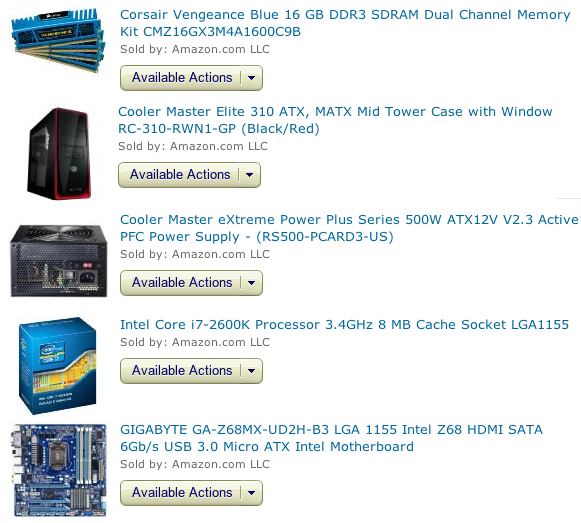 So this $753 custobeast still costs less than the high end Mini but is faster than the highest-end iMac and beats the MacPro in areas like disk speed.  Some highlights

What I am missing from a Mac:

Coincidentally, at the time I was finished with the hardware construction, TonyMacx86.com finished what they call the Unibeast USB installer which made things much easier than I had originally anticipated.  This utility allows you to make a bootable installer for just about any CustoMac out of your existing Lion instal image and a 8GB USB Stick.

After finishing putting the Hackintosh together (took about 45 minutes), I booted it up and changed some BIOS settings:

Your mileage may vary on these things. Consult TonyMacx86 forums – there are hundreds of people in there who have done just about any configuration out there.

Once you boot from the Unibeast installer, you’ll be asked where to install and you’ll eventually end up with a familiar  Lion install.  Once that finishes, you’ll have to tweek some settings with the “MultiBeast application” as well.

Again, I’ll again defer to Tony’s forums for this.

It took me a few hours to figure out which drivers to install, but afterwards I had a fully working Hackintosh running Lion 10.7.2 with absolutely no problems.

With the incredibly fast Samsung 830 SSD, it boots up in under 10 seconds and is faster than any other Mac I’ve ever used.  Disk read speed was about 500MB/s while write times were generally close to 400MB/s.  This is high end RAID speed except SSDs are much better at random reads and writes.  Put simply, this is as fast as you can get without breaking the bank. 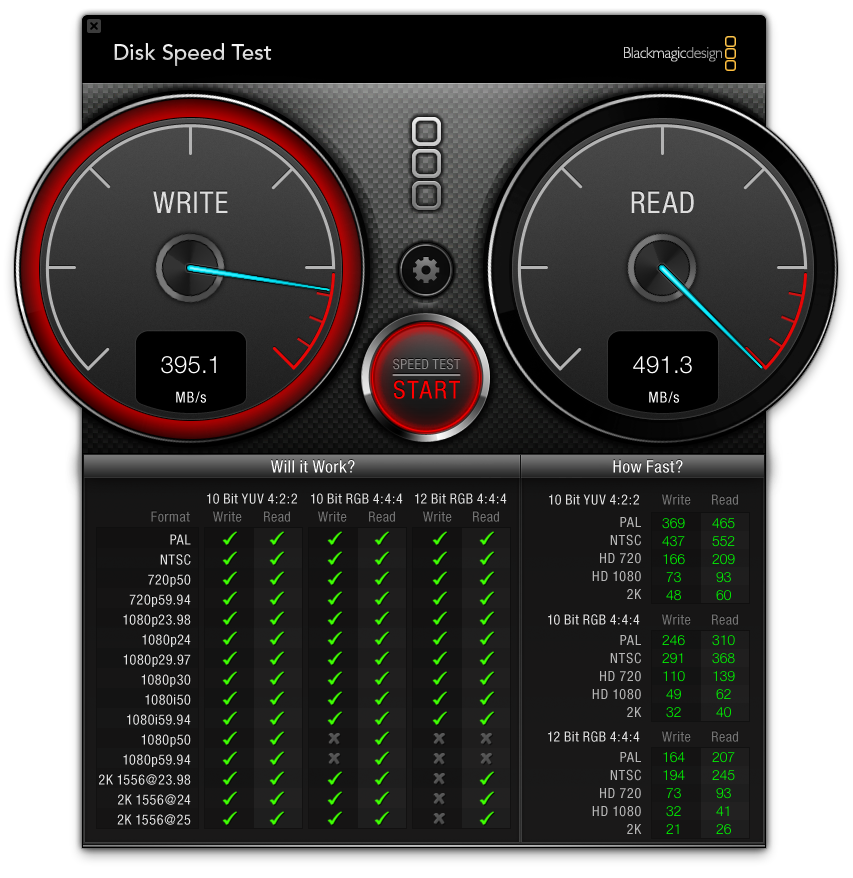 The new Gigabyte motherboards and Intel Core i7s allow for easy overclocking and I was at 4GHz/1600MHz RAM in no time.  Because I simply don’t need the extra speed and didn’t want to buy a bigger heat sink for the CPU to keep it cool under high load, I am back down at normal speeds but I know some will appreciate the ability to go to 4GHz and beyond.

Running a Cinebench (before overclocking) I hit at or above a high end iMac in processor.  My Video card was relatively cheap and the results there are par for the course. 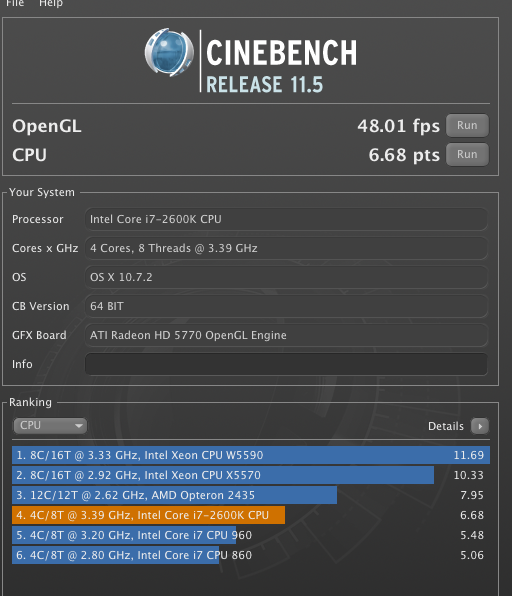 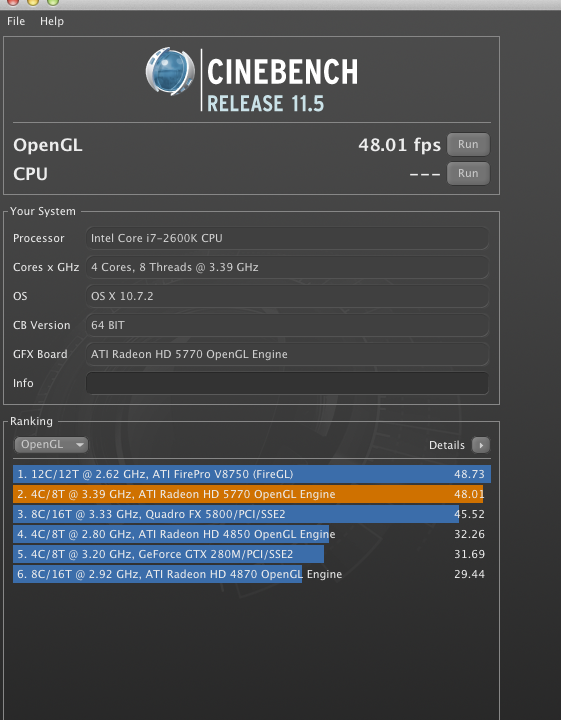 Here’s the Geekbench before overclocking (and adding the video card).  Note that this is the free 32-bit version. 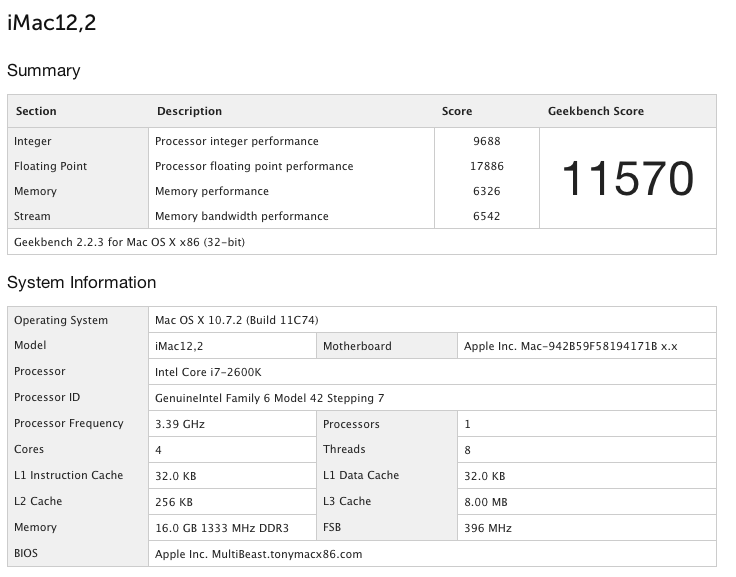 Apple obviously doesn’t approve of the Hackintosh scene but it is a thriving community of happy MacOS computer owners who often have a “hobby machine as their second or third “Mac”.  It is hard to blame them with the ease at which you can build a $300 Mac with 8GB of RAM and a modern processor and a lot of things Apple doesn’t offer like expandability, USB3, eSATA and overclocking.

My Hackintosh has been running fine without a blip for over a week.  In fact, some of the crashing issues I have on my Air (Twitter, Preview, iChat), don’t exist on my Hackintosh.  As for appearances, it is butt ugly, but it hides inside my desk with a faint fan hum (compared to the jets of a Mac Pro).

I had initially intended this to be a hobby machine (in fact, I wasn’t sure MacOS would work on it and had it pegged for a good Linux machine as an alternative), but it is so fast and reliable that it has become my go-to Mac.

In fact, there is something special about putting together your own computer that makes this that much better.