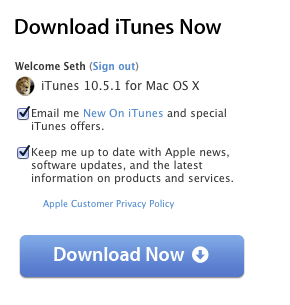 Following the recent release of the iTunes 10.5.1 beta 3 to developers, Apple today started pushing out iTunes 10.5.1 to the public. You should see the update appearing in Software Update any second, otherwise it’s already available for download from Apple’s site here.

Apple also confirmed the availability of iTunes Match in the U.S., with the following announcement on their iTunes page. iTunes Match syncs users’ music to iCloud for $24.99 a year. Unlimited songs can be synced and doesn’t affect iCloud storage, but only songs that are available on iTunes can be synced.

Even though it is available to the public, Apple is still labeling iTunes Match as a beta product. Developers who tested Match will still receive a free three months with a year subscription.