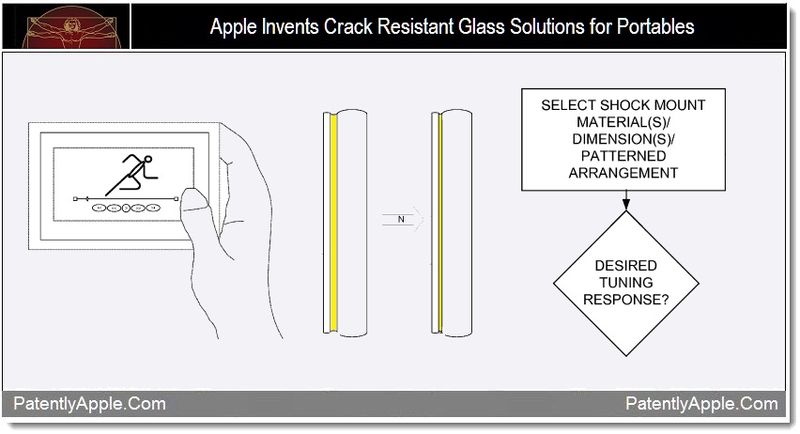 In January we told you about a class action lawsuit filed by a Los Angeles man who describes the iPhone 4’s glass back panel as a “design flaw” and claims Apple “refuses to warn consumers” about its susceptibility to cracked glass under normal usage . We already know the iPhone 4S hasn’t made many improvements in terms of the durability of its glass casing, but a new patent application shows exactly what Apple has been working on to better implement a drop-resistant all glass design.

Our friends over at PatentlyApple detail the patent which describes different embodiments of including a shock mount made of polymer, foam, gel, or similar material in a future iPhone or iPad’s cover glass (as usual Apple also mentions the majority of their other products including iMacs, MacBooks, iPods, displays, and televisions). In one solution, Apple describes a “mechanically actuated retractable”, which would essnetially allow the cover glass to withdraw “at least partially into the housing in response to sensing the drop event, thereby protecting for the cover glass.”  The report explains:

In one imagining of the solution, Apple envisions a ‘tunable shock mount’ that would provide “compression and dampening” in response to an impact to further increase its effectiveness. The report also details an airbag-like tunable shock mount that could use a “liquid based micro inflatable bladder”. PatentlyApple explains:

Apple’s patent FIG. 5 shows a housing and a cover glass in cross sectional view having a tunable shock mount 505 disposed there between. The tunable shock mount could comprise of an inflatable bladder 506 filled with a fluid 507. Tuning could be done in various ways such as by selection of materials for the bladder and fluid, and by varying an amount of inflation.

Additionally, Apple described methods of chemically strengthening the glass itself using materials other than or in addition alumino silicate glass, a.k.a Gorilla Glass. Some of these methods could include chemical treatments such as making glass thermal shock resistant with the use of borosilicate glass and sodalime.

Another Apple patent that has surfaced today can just as easily be imagined in a near-future implementation, describing a universal adapter that would essentially allow you to charge all your devices through a single plug in a traditional receptacle. The tech would include converters to match the voltage requirements of your specific devices, and could also include MagSafe integration. Hit up PatentlyApple for the full details.