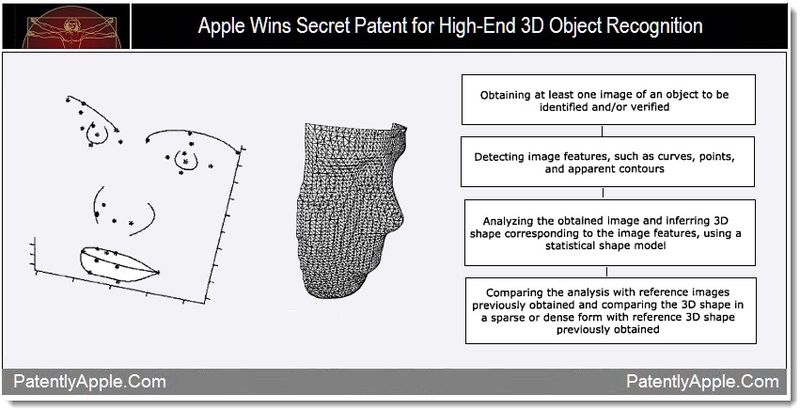 PatentlyApple point us to a few recently obtained Apple patents published by the US Patent and Trademark Office. Perhaps the most interesting of all is a patent covering 3D object recognition technology that could potentially be implemented in future iPads. While unsophisticated facial recognition tech is already present in consumer mobile devices, Apple’s patent details a method of automated biometric identification to identify or verify an object or face based on a 3D representation compiled by analyzing the curves, points, contours, etc., of a 2D projection. In other words, a three-dimensional “statistical shape model” could be pulled from a 2D image, allowing more accurate detection and verification of 3D objects, such as a face or objects from “airport security X-ray images”, for example. The report explains:

The recovered 3D shape is the most probable shape consistent with the 2D projections, i.e. the images. The statistical model needs a bank of data, denoted training data, where the 3D positions of the image features are known, in order to learn the parameters of the model. Such data sampling could be done using e.g. binocular or multi-view stereo or range scanners. Once the model parameters are learned, the 3D shape can be computed using one or several images. The 3D shape is then used, by means of the presented invention together with the 2D image data, to identify or verify the object as a particular instance of the object class, e.g. the face belonging to a certain individual. A positive (or negative) identification initiate proper action by means of the presented innovation.

It’s unclear when exactly Apple obtained the patent, which lists Professor Kahl Fredrik as the main inventor and dates back to 2005. However, PatentlyApple points out Jan Eric Solem, who owned Polar Rose before they were acquired by Apple in 2010, is also listed as an inventor. Polar Rose technology is currently being used in facial recognition and detection features in the iOS 5 Camera app. The report speculates the next-gen PowerVR GPU from Imagination Technologies will play a role in providing Apple with the juice necessary for advanced 3D rendering, despite the company not yet being confirmed as a licensee:

This is likely to be incorporated into a future iteration of the A-Series iPad/iPhone processor that will provide mind-boggling photo-realistic imagery working in concert with Apple’s recent acquisition of C3 Technologies.

Hit up PatentlyApple for more details and other recently published Apple patents including a Highly Accurate Magnometer and push notifications.