AT&T CEO: Recent price jacks due to AT&T’s attempt to monopolize GSM in US 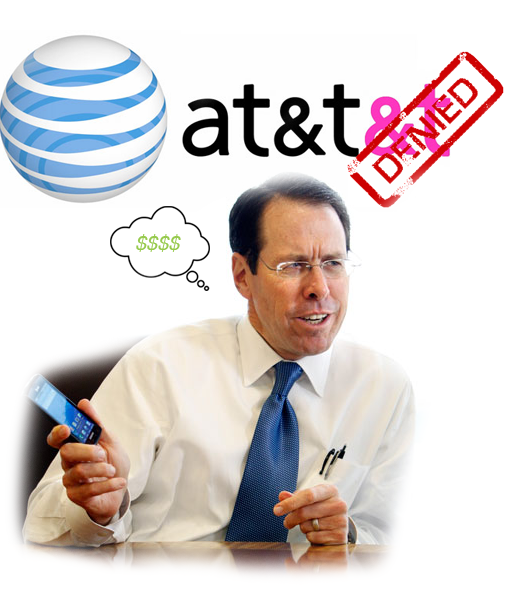 AT&T has a grudge with the Federal Communications Commission, and during the mobile carrier’s quarterly earnings call today, CEO Randall Stephenson criticized the FCC over spectrum availability and the bombed acquisition of T-Mobile USA, with him further claiming that AT&T’s spectrum crux could cause jacked prices against its highest data users.

The American Telephone and Telegraph Company, founded in 1876, once held a monopoly on wired phone service in the United States, but the U.S. Department of Justice broke up Alexander Graham Bell’s company into seven “Baby Bells” with an antitrust lawsuit that turned into a settlement in 1982.

Since then, the company has slowly reassembled. Six of those seven “Baby Bells” merged into two single companies: AT&T, Inc., (Ameritech, BellSouth, Pacific Telesis, and Southwestern Bell) and Verizon Communications, Inc., (NYNEX and Bell Atlantic). The acquisition of the fourth largest wireless service provider in the U.S., Deutsche Telekom AG’s T-Mobile USA, would have poised AT&T to gain a monopoly once again, but this time through its 3G GSM service in the U.S., while garnering the No. 1 spot in the U.S. wireless market. However, the FCC stepped in this time and dashed the company’s monopolizing hopes.

The FCC requested a formal administrative hearing into AT&T’s proposed $39 billion takeover of T-Mobile USA last fall, subsequently causing the U.S. carrier to withdraw the pending approval applications in November 2011. The decision rolled into a killed bid and garnered a $4 billion pretax charge on AT&T’s Q4 2011 accountancy sheet that includes a $3 billion default payment due to Deutsche Telekom over the deal’s non-completion and an additional $1 billion in spectrum value that AT&T would have to forgo.

AT&T CEO Stephenson released his frustrations concerning the debacle at the company’s Q4 2011 financial conference call today. He set his sights on the FCC and lambasted the agency while decrying it of choosing “winners” and “losers” in regards to approving and regulating deals…

“The rules are so fluid, you can drink out of them right now,” said Stephenson.

AT&T’s fourth-quarter loss of $6.7 billion reported earlier today was largely due to the failed merger’s fee, and it likely fumed Stephenson’s vinegary comments. The CEO accused the FCC of swaying standards and said the T-Mobile deal used one set, while AT&T’s successful acquisition of Qualcomm’s spectrum followed another set of standards. He also claimed AT&T’s “biggest problem” concerns the delicacies of achieving a deal.

“Our biggest problem is identifying what the rules are,” Stephenson explained. “It’s figuring out how much we’re allowed to buy.”

Stephenson called upon Congress to pass legislation that would sanction how the FCC can approach its next auction, which would inadvertently deprive the regulatory body’s ability to allot conditions on potential bidders and spectrum usage. It is worth noting that the House of Representatives drafted a similar bill, but the FCC is adamantly opposing it.

Moreover, the CEO said AT&T’s spectrum dilemma would force AT&T to increase prices and take further actions against its high-consuming data users to manage connection speeds. Today’s comments are in lieu of AT&T announcing it sold 9.4 million smart phones (including 7.6 million iPhones) in 2011’s fourth quarter. Meanwhile, AT&T is continuing to mewl over its spectrum scarcity that has heightened in recent years due to the iPhone and other devices upping the ante and causing an explosion of excess data to flow through the carriers’ channels.

“The No. 1 issue for us, and the industry I believe, continues to be spectrum. This industry continues to see just explosive mobile broadband growth. It provides one of the few bright spots in the U.S. economy, but I think we all understand that this growth cannot continue without more spectrum being cleared and brought to market,” Stephenson contended.

“Despite all the speeches from the FCC, we are still all waiting. The last significant spectrum auction was nearly five years ago now. This FCC has made it abundantly clear that they will not allow significant M&A to help bridge these delays in clearing up new spectrum. So, in absence of options, our company and others have taken the logical step to make smaller transactions to acquire the spectrum we need to meet demand.

First, while our overall spectrum position is competitive, we’ve led the way in mobile data. Therefore our utilization rates are running very hot and demand continues to accelerate. So, we will continue to do a number of things. In a capacity-constrained environment we will manage usage-based data plans, increased pricing and managing the speeds of the highest volume users. These are all logical and necessary steps to manage utilization. LTE deployment is also going to play a roll. We ended 2011 with 74 million LTE POPS covered and will accelerate that pace considerably in 2012, setting us up to complete deployment to 80 percent of the U.S. population in 2013. LTE does give us a 30 percent to 40 percent lift in network efficiency, but at current growth rates that equates to only a year’s growth in traffic. So, LTE is important but it is not the silver bullet in terms of capacity planning. What that means is that to meet customer demand we need to continue our spectrum push.”

In line with Stephenson’s warnings, AT&T announced last week it is raising data-plan prices for smartphone and tablet users by $5 a month while increasing the usage ration on each package. The reassessed plans start at $20 for 300- megabytes, $30 for 3-gigabytes and $50 for 5-gigabytes. The previous plans offered 200-megabytes for $15, 2-gigabytes for $25 and 4-gigabytes for $45 a month. 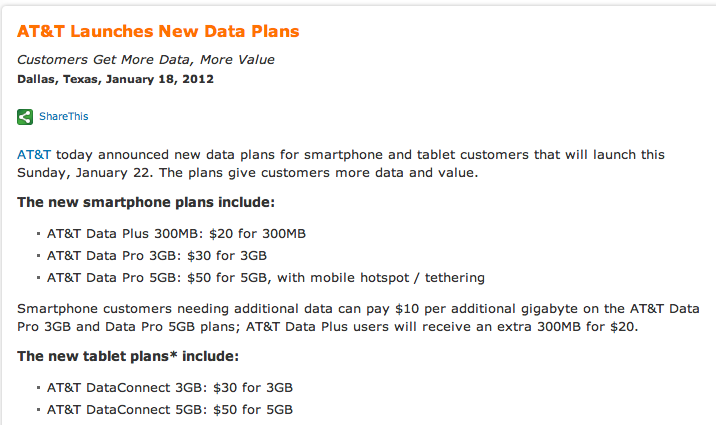 AT&T’s monopoly whims are a hope of the past, and its future is full of spectrum-need and threats against the FCC that will likely result in iPhone users sanctioned with data restrictions and jacked prices. AT&T’s plans are also lackluster for rural broadband.

“To be perfectly candid, we don’t have a mobile broadband solution for rural America right now,” Stephenson said.

The company’s CEO said AT&T broadband would have reached 99 percent of the country if the T-Mobile USA merger had succeeded. However, with the acquisition deal in the grave, AT&T does not have a current plan aside from strengthening its LTE network across the country.