Right before Apple made AirPlay mirroring for Macs official with the Mountain Lion developer preview, we told you about AirParrot, a third-party app that brings the same functionality to Snow Leopard. The same developers just announced the first solid release of another AirPlay app, but this time it is for iPad 2 and iPhone 4S mirroring to your Mac. “Reflection” ($14.99 single license) allows users to easily view their iPhone or iPad’s screen (and audio) on a Mac’s display over AirPlay. We went hands on…

Reflection is still a work in progress, but it is more than solid enough for everyday use based on our first impressions. After installing the app, simply select your Mac from AirPlay on an iPad 2 or iPhone 4S, and then the device’s screen is instantly displayed in real-time on a Mac while encased in an iPad or iPhone-shaped frame (like the Xcode iOS simulator). In our tests, it hovered around 30 FPS and set at Hi-Res (1929-by-1080). Unlike AirParrot, Reflection also supports full mirroring. That means full audio and orientation support. You can also lock your orientation to landscape or portrait if necessary. 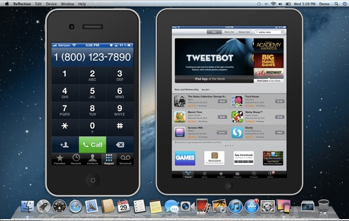 In the video above, we put the app through the paces by playing a YouTube video, running a game with Cut the Rope, and browsing in Safari. These were each tested on an iPad 2. You will experience the odd hiccup, but any lag is bearable throughout the overall experience for the most part.

The only time an app crashed, not surprisingly, was when graphically intensive games like “Dead Space” and “Jetpack Joyride” ran. A reboot of the iPad was necessary to get Reflection back to normal. It will be a hit and miss with games, because some you would expect to run actually crash, while others like Cut the Rope will run perfect most of the time. Other apps run just as smooth as you could ask for. As a test, Netflix ran without issue, and we experienced hardly any lag in Maps.

Reflection does not include a ton of options. At this point, the app’s preferences are limited to simply selecting a suitable resolution for your device and the ability to launch as a full-screen app. However, launching in full-screen mode (shown toward the end of the video above) will simply put the frame on a grey background. This allows Reflection to function as a full-screen app in OS X rather than having the iPad’s screen fill the Mac’s entire display. The app’s website also hinted at the ability to record your screen, but that functionality is not currently included.

You can grab a single-user license of Reflection for $14.99 or 5 licenses for $39.99 here. There is also a free limited-time trial available through the website before you make the purchase.