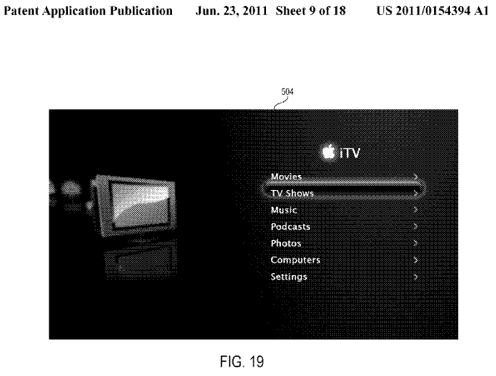 Today, U.S.-based iTV entertainment issued a press release warning Apple to stop infringing its trademark “iTV,” which it has held since formation in 2001. The company uses the 2011 U.S. Patent No. 2011/0154394 A1 (illustration, right) as an example that Apple is already using the iTV trademark, if only internally. Apple describes its device as “an audio and video entertainment center.”

Laughably, Apple has not made any intentions to market “iTV” publicly, yet the contending company, headed by Chief Executive Patrick Hughes, is threatening Apple and plans to crash the iPad launch event tomorrow to hand out pamphlets.

The U.K.-based iTV made similar saber rattles, as well.

Analysts have said that Apple could use the “iTV” name in its product, but nothing remotely public from Apple has come out. In fact, there are many reasons why Apple probably will not ever use “iTV.”

When the Apple TV was announced (below), Steve Jobs said internally it was called “iTV,” but obviously there are enough trademark issues to keep Apple from going mainstream with the name—at least yet. From the patent report filed last year, it is clear that Apple is still calling it “iTV” internally.

The Globe and Mail said Apple was experimenting with voice and gestures; and The New York Post revealed last week that Apple was driving hard bargains with content providers over supplying Apple users with cable-type content by Christmas. Moreover, Apple TV cheerleader Gene Munster said Apple’s entry into the TV business would be the biggest thing to occur since the smartphone. Meanwhile, Samsung said it is not afraid of Apple’s overtures into TV, because consumers mostly care about picture quality.

We first revealed that Apple TVs were disappearing from store shelves last month and that a refresh was imminent.

iTV ENTERTAINMENT WARNS APPLE TO STOP INFRINGEMENT OF ITS TRADEMARK

San Francisco, CA March 7, 2012 – iTV Entertainment, LLC announced today that its counsel, Bart S. Fisher, had sent a letter to Apple, Inc. board director, Al Gore, suggesting that a meeting be held “to see if an amicable and fair transaction arrangement” could be made between the parties with regard to Apple’s use of the “iTV” mark displayed throughout their U.S. Patent No. 2011/0154394 A1 for a product that is rumored to be in development by and being planned for a possible launch in 2012. Apple describes its device as being “an audio and video entertainment center”.

“The Apple iTV entertainment center device would cause a great amount of confusion with iTV Entertainment customers”, according to iTV Entertainment LLC Chief Executive, Patrick Hughes. Hughes also said that Apple CEO Tim Cook and general counsel Bruce Sewell have been notified in addition to board member, Andrea Jung, and Apple’s head of patents, Ed Scott, that should “the iTV rights issue” not be resolved, then we would have no other choice but to “bring to the International Trade Commission (ITC) [our trademark infringement complaint] that could result in an exclusion order being issued against Apple under Section 337 of the Tariff Act of 1930.” Similar to Apple’s alleged infringement of the Proview Technology trademark in China, this potentially new infringement case could possibly put Apple into another trademark battle where certain Apple products could be barred from importation or sale within a major market, where in this case, it would be the United States. Apple is no stranger to Section 337, as they currently are using it in a patent case against Motorola Mobility in an attempt to block the importation of Android phones.

Hughes contends that Apple was fully apprised in August of 2010 that iTV Entertainment has been using its mark in commerce since 2001, but perhaps Apple has been more concerned about Great Britain’s second largest broadcaster, ITV Network LTD, which has had rights in Great Britain to its ITV name since its formation in 1955. As recently as 2010, ITV’s group director Mike Large said ITV would ‘vigorously defend’ its brand and reputation and said it could take legal action against Apple if it goes ahead with plans to use the iTV mark. However, ITV seemingly and conspicuously reversed its position in January 2012, and now deny that they would take any such action against Apple or that such dialogue had even taken place. This appears to be evident from the fact that ITV Network’s U.S. application for the ITV trademark went abandoned on January 13, 2012 – even though it had a filing date of May 5, 2006; and just week or so ago, Paul Dale (CTO, CIO, COO) of ITV Plc tweeted “I’m at Apple Europe! CIO Briefing, by invitation only ;-)”.

Hughes and Fisher contend it is inconceivable that Apple, with their $100B cash stockpile, would simply ignore perhaps the last impediment in their quest to secure the coveted ‘iTV’ name which ardent Apple followers see as filling out their universal ‘i’ family line of revolutionary iPod, iPad, iPhone, iOS, iCloud, and iTunes products and services.

Widely quoted Apple analyst Gene Munster of Piper Jaffray recently said to Bloomberg Radio about the impending Apple iTV and how it could affect the market, “It will be the biggest thing in consumer electronics since the smartphone.” He has also been quoted as stating, “Apple could sell 1.4 million units, and it could add $2.5 billion to 2012 revenue, or roughly 2% of the company’s total.” In addition, Barclays Capital has already forecast sales of $19 billion for the product in 2013

With several top analysts predicting the iTV as potentially driving Apple’s market capitalization to over $1 trillion, it doesn’t make much sense for Apple to risk having their iTV products denied entry into the United States while a trademark case works its way through the ITC process – especially considering Apple’s recent track record at the ITC. Apple, just late last year, lost a case in a case they took to the ITC against Motorola Mobility. Apple clearly cannot afford to continue ignoring these important trademark issues and deal with them at a later time, which has been the tactic they have mostly used in the past.

As a consequence of Apple’s inaction, Hughes and Fisher have also been exploring teaming relationships with potential Chinese electronics manufacturers for their own iTV Entertainment system which could be sold exclusively in the United States and note that Chinese manufacturer Hisense Electronics is already marketing an I’TV tablet device in China. Doing the right thing by seizing the opportunity to negotiate a fair exclusive license for the use of the iTV mark would greatly enhance Apple’s reputation and improve their image – not to mention going a long way toward fulfilling Steve Jobs’ legacy. Hughes and Fisher (who has an extensive background in representing Chinese enterprise) believe however, that time is running short for Apple.