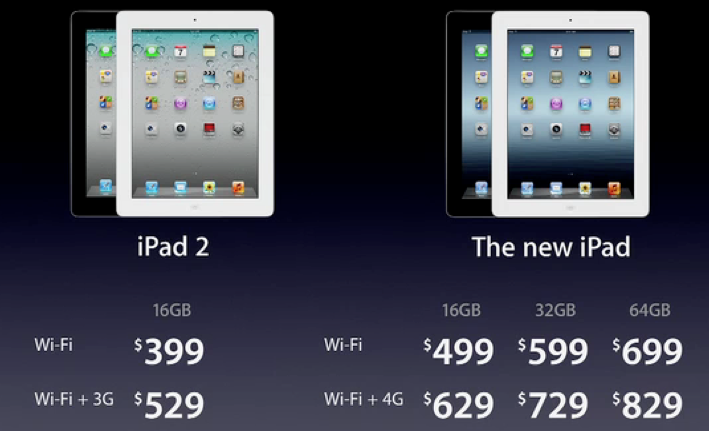 During the new iPad unveiling yesterday, Apple announced it would drop the price of the 16GB iPad 2 to $399 with the Wi-Fi + 3G model discounted to $529. This was, of course, to make room for the new iPad, which would start at $499 for the 16GB Wi-Fi model and $629 for the 16GB Wi-Fi + 4G model. We knew the price drop would likely be implemented by the new iPad’s March 16 launch date, but it seems BestBuy and other retailers are already offering the new prices. BestBuy is now advertising not just the 16GB models, but the entire iPad 2 lineup, for $100 off the usual pricing. However, the best price we have been able to find comes from Micro Center. It is offering the 16GB Wi-Fi iPad 2 for $360.

BestBuy is advertising the new iPad as being available on March 16 (despite Apple’s own shipping times slipping), but it has not announced preorders for the device. On the other hand, RadioShack confirmed that you can now preorder the new iPad by purchasing a $50 gift card that can also go toward the final purchase price. Its website is listing all iPad 2’s as on sale in-store. RadioShack’s full press release below also outlines its trade-in program for old iPads:

Starting today, the new iPad® will also be available for pre-order by purchasing a $50 RadioShack gift card that can be used toward the final purchase.

To celebrate the launch, customers can use RadioShack’s Trade &amp; Save program to receive up to $350 for an iPad 2® and up to $175 on an original iPad® in working condition. Customers can also use their Shack Card on the purchase of a new iPad® or iPad 2® to receive a $50 mail in rebate. This special promotion will end on Saturday, March 31.

Benefits of purchasing the new iPad® at RadioShack include:

• RadioShack’s Trade &amp; Save program allows customers to trade in an old mobile device or other retired technology and immediately apply the appraised trade-in value toward a current purchase. Shoppers can appraise their device at http://www.RadioShack.com/tradein, and then bring their device to the store to have the appraisal confirmed and complete the trade.

• RadioShack is proud to be on the short list of retailers that provide customers with optional AppleCare + for accidental damage to iPads. Joining Target, phone carriers and Apple stores, AppleCare+ can be added with the purchase of your iPad at RadioShack locations nationwide.