At the launch of Apple’s third-gen iPad, the company’s Marketing Chief Phil Schiller claimed the device’s new A5X processor with quad-core graphics provided up to 4x the graphics performance of NVIDIA’s Tegra 3 chip. Schiller also claimed the new chip provided 2x the graphics performance of the iPad 2’s A5 chip. NVIDIA was skeptical of the benchmark data behind the claims, but early benchmarks seemed to show A5X outperforming a Transformer Prime running Tegra 3 in the majority of tests.

New benchmark data provided by IGNshows the iPad 2’s A5 chip outperforming both the A5X and Tegra 3 with the A5X’s improved graphics going largely toward powering the new iPad’s high-resolution Retina display of 3.1 million pixels. The A5X shows a significant increase in performance over iPad 2 and Tegra 3 devices only when the chip is not forced to power the Retina display in “off-screen” benchmarks. 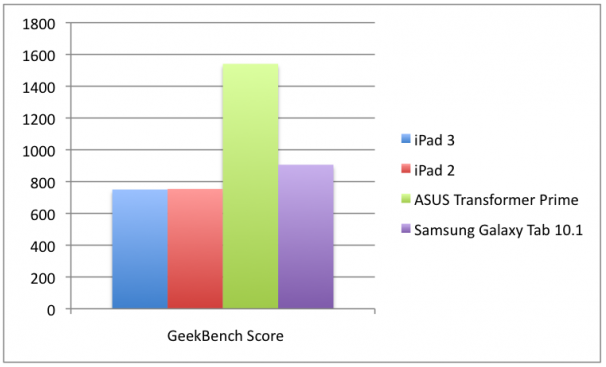 As for raw CPU power, a Tegra 3-powered ASUS Transformer Prime and Galaxy Tab 10.1 scored higher in GeekBench than both the iPads:

Tegra 3’s quad-core configuration blazes past the dual-core A5X, garnering GeekBench scores of 1540 and 750, respectively. Interestingly, the A5X’s average score fell a few points short of the iPad 2’s standard A5 chip, 753. Both the A5X and the A5 also fell shy of the Samsung Galaxy Tab 10.1’s Tegra 2, which received an overall score 905. The gains made by the Tegra 3 are easily chalked up to its two extra cores, but it is also boasts the highest clocking speed of the group at 1.6GHz, compared to the 1GHz clock of the A5X, A5 and Tegra 2.

However, Apple’s stats showing 4x performance were specifically related to the new chip’s quad-core graphics. When it comes to the graphics tests with GLBenchmark, iPad 2 scored higher than the third-gen iPad in both tests. Meanwhile, both iPads beat out the Android tablets. IGN noted the tests “ran at the native resolution of whatever device it was running on.” 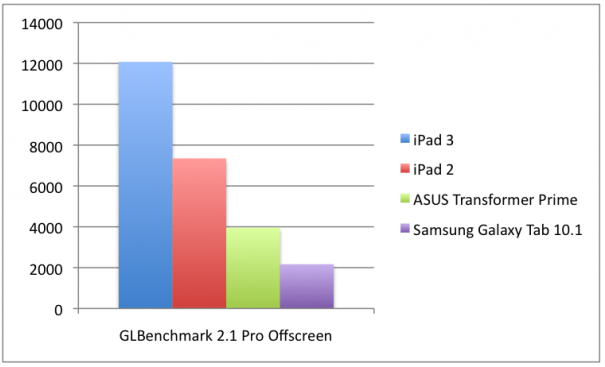 The results of the off-screen tests (pictured above) show the A5X producing 15,412 frames at a rate of 138 FPS compared to the iPad 2 that has 10,143 frames at 90 FPS. The A5X significantly outperformed Tegra 3 when not powering the Retina display, but it did not quite provide the 4x performance that Apple’s stats claimed.