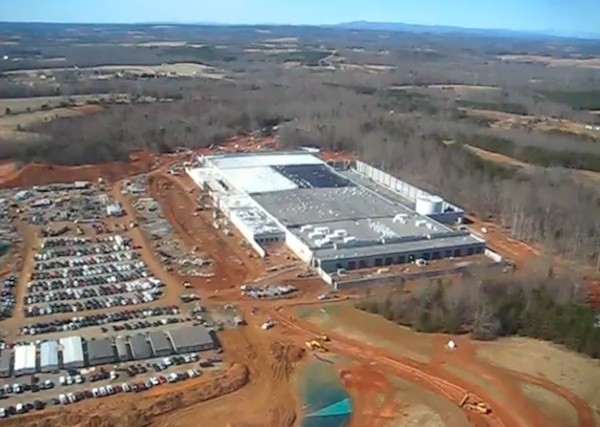 There were several new developments today about how Apple will help fuel its new North Carolina data center that powers iCloud. According to a filing today, and as first reported by CNET, Apple tapped Bloom Energy to provide fuel cells to power the data center. Each fuel cell can set off up to 200 kW of power by combining biogas with oxygen and other chemicals. Apple plans to build a 4.8 MW fuel cell farm for its data center that is set to consume a whopping 20 MW of power. Apple will get the other needed energy from an adjacent 174-acre solar farm that is said to bring 20 MW of power toward the plant, according to Apple’s latest numbers.

Bloom Energy announced today the opening of a new factory in Newark, Del., which will most likely manufacture some— if not most— of the fuel cells that would be used at Apple’s North Carolina data center. The new factory is set to create hundreds of jobs and open up Bloom Energy’s business out of California.

Since the Bloom Energy fuel cells require either natural gas or biogas, Apple will take an interesting approach by using trash from local landfills to produce the biogas, according to Data Center Knowledge.

Apple will use methane from landfills, which will be transported via a natural gas pipeline system, according to a filing with the Federal Energy Regulatory Commission (FERC). The raw biogas will be cleaned and separated to increase the methane content and remove unwanted components (including sulfide, chlorine and sulfur) before being injected into the natural gas pipeline.

Biogas is considered a renewable resource in many states, but is not widely used due to a low awareness of the technology. As Apple works to make its huge data center environmentally friendly, fuel cells powered by biogas and solar panels should prove effective.