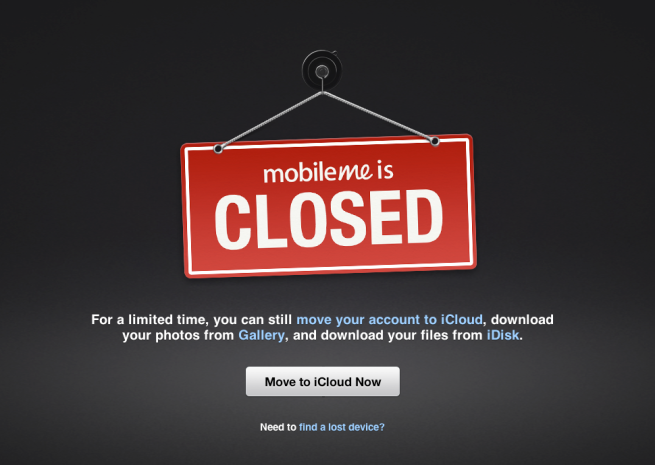 If you haven’t done so already, the time has finally come to make the switch from MobileMe to iCloud. Apple closed down their old syncing service today and removed the iDisk and MobileMe Gallery apps from the App Store, leaving behind any stragglers who have not yet made the jump to the new iCloud hotness launched alongside iOS 5 last year.

If you are one of those stragglers, you’ll be happy to know that you can move your data to iCloud right from the MobileMe homepage, and it seems Find My iPhone will still function for users who have not updated to iCloud due to their devices being too old to run iOS 5 or OS X Lion, and iDisk and Gallery files can still be retrieved for a limited time.

Hit the break to read about the fascinating history of Apple’s cloud services.

MobileMe started its life as iTools, a free collection of Internet-based tools for Mac users that launched on January 5, 2000. iTools users would receive a free @mac.com email address and the first iteration of iDisk, among other features. Two and a half years later, Apple rebranded the service as .Mac and added several new features to the bundle, including a virus scanner and a backup utility. While previous web-based services had been free, .Mac was the first version of the bundle to cost anything. Apple priced .Mac at $99 a year–a price considered far too steep by many who criticized the limited number of services it offered.

In 2008, Apple once again renamed and revamped the system, calling it MobileMe. The new service launched alongside the 2.0 version of what was then called “iPhone OS”, the iPhone 3G and the iPhone App Store. The launch was unfortunately plagued by access problems and frequent downtime, likely due to Apple simply trying to do too much all at once. In an internal email to employees, Steve Jobs recognized that fact and noted that “the launch of MobileMe was not our finest hour.” The same email informed Apple’s employees that Jobs had appointed Eddy Cue to the newly-created position Vice President of Internet Services, putting Cue in charge of the iTunes Store, the iPhone App Store, and MobileMe.

In 2010, Apple began experimenting with a free cloud service by offering certain features of MobileMe for free. Specifically, Find My iPhone, which had previously only been available through the $99-a-year service would become available to most users running iOS 4.2.

Apple put the final nail in MobileMe’s coffin in 2011. As boxed retail versions of MobileMe began disappearing from Apple Stores, many speculated that the service would soon be free to all users. Those rumors proved to be true when Apple announced iCloud, an updated version of MobileMe with new features and no price tag. Under the guidance of Eddy Cue, iCloud experienced a much smoother launch than its predecessor.

Apple gave MobileMe subscribers just under a year to migrate to iCloud before the lights went out on MobileMe permanently and offered a free year of service to anyone with an active MobileMe account on June 6, 2011 (sadly only two weeks after I had finished by 60-day free trial without renewing).