How to get OnLive Desktop running on a Mac, allowing free access to Microsoft Office 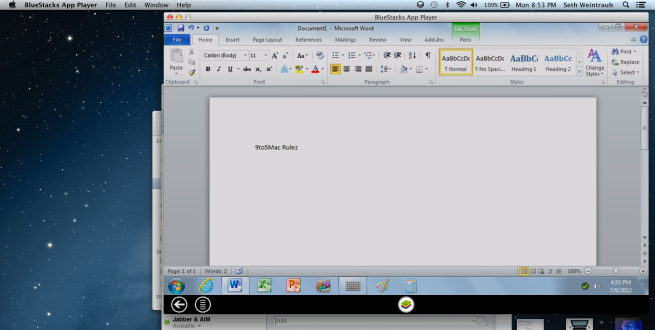 We have known about OnLive’s awesome Desktop feature since this year’s Consumer Electronics Show. OnLive Desktop allows you to get access to a full Windows 7 client, complete with the ability to use Microsoft Office and other Windows apps. It was introduced as an iPad and Android app earlier this year, coming with 2GB of free cloud storage and paid plans that offer a bit more storage for those looking to get serious. The folks at OnLive promised the release of a Mac app with similar VM functionality, but that day has never come.

Luckily, Snowleo on the OnLiveFans forum posted an unofficial guide to getting OnLive Desktop to run on a Mac. It is a simple process, requiring only a free application called “Bluestacks”. Bluestacks lets Mac users run Android apps on their desktop, and it now allows them to access OnLive’s desktop service with a little side-loading. Only a few steps are required, and you will soon have free access to a full version of Microsoft Office on your Mac. Here’s how:

First, you will need to download the Bluestacks application, and then register for a OnLive account on its website. Now comes the only tricky part: Bluestacks does not have a built-in browser, so you will need to open the Twitter app, and then open a link from within. From there, Bluestack’s hidden browser will launch with the link you clicked. Navigate to the XDA Forums, where you will download the OnLive Desktop .apk that installs just like a normal Android app. Sign-in to OnLive, and then you are off to the races.

You will notice that the frame rate is a bit slower than native, but it definitely comes useful in situations when you need quick access to some Windows features and more importantly Microsoft Office.

Are you curious about the technical side of OnLive Desktop, or how it works exactly? OnLive beams a full version of Windows from its gigabit-connected servers to your device, leaving just the slightest bit of lag that is usually unnoticeable. Earlier this year, Microsoft told the creators of OnLive that it was breaking Window 7’s licensing agreement with the way OnLive Desktop was distributed. Now, OnLive switched to Windows Server 2008 to rid itself of any legal trouble.

If only Apple would release its own iOS VM solution. One can dream, right? (via OnLiveFans)