Nielsen needs to work on its graphics (Update)

Nielsen released smartphone purchasing data yesterday that depicted Apple grabbing more than a third of the total smartphone market in the most recently surveyed month. Android was over 50 percent. That is almost 85 percent of the market together, which is a striking number (and over 90 percent in the last three months). But, you would not know it when looking at Nielsen’s graph: 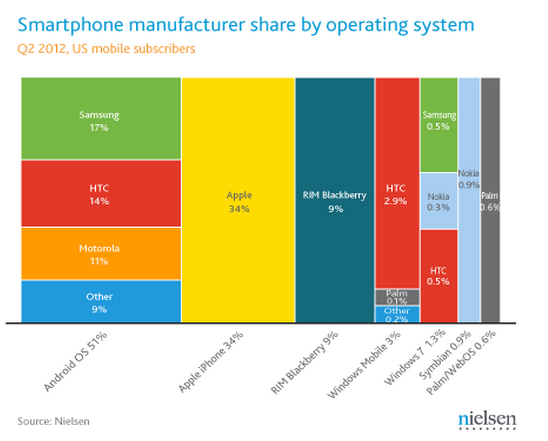 RIM at 9 percent seems to have almost the same share as Apple. Windows Mobile, Windows 7, Symbian, and Palm only come up with 5.8-percent of the market, but together they have a much larger piece of the pie than Apple. Well, we did a little Photoshopping and put their portions into proportion (Again, the disparity is growing with iOS and Android now over 90 percent): 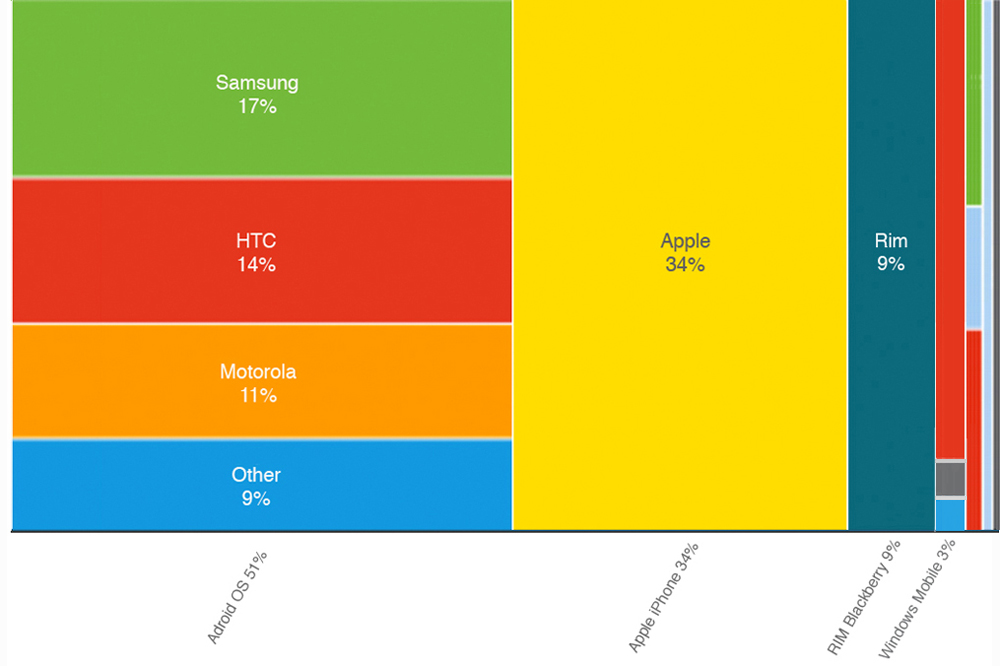 ^That is an entirely different story.

Nielsen likely enlarged the remaining four operating systems’ fill spaces to fit captions. However, Nielsen, which often touts “no other company can match [our] depth and breadth when it comes to analyzing the mobile market,” should probably maintain accuracy and precision when crafting graphics for its in-depth reports. Doctoring the lines, err bars in this case, for visual appeal is a sure-fire way to confuse folks who just want to take a quick glimpse at the results and not comb through all the stats.

In this case, the graphic tells the story: iOS and Android are running away with the smartphone market.

Mapping a chart that displays all the details accurately is easy enough with a key. Heck, I am sure there is a ton of different methods for graphs that would better compliment Nielsen’s mobile analysis. It just strikes us as strange that a company with such resources for cropping data on mobile analytics could somehow lack the ability to publish fair illustrations.

UPDATE: Nielsen updated its post with a revised graph (below) and the following statement:

“The original graphic in this post included a chart depicting U.S. smartphone manufacturer share which did not scale proportionately. While all data points in the original post and graphic remain accurate, the post has since been updated with a correctly scaled image.”

We cannot help but notice the striking similarities between Nielsen’s newest graph and 9to5Mac’s version. The one we posted featured a changed font and a dark stripe down the Windows Mobile bar, and now Nielsen’s revised illustration boasts the same characteristics but with a capitalized “RIM” and bolded captions for smaller operating systems. 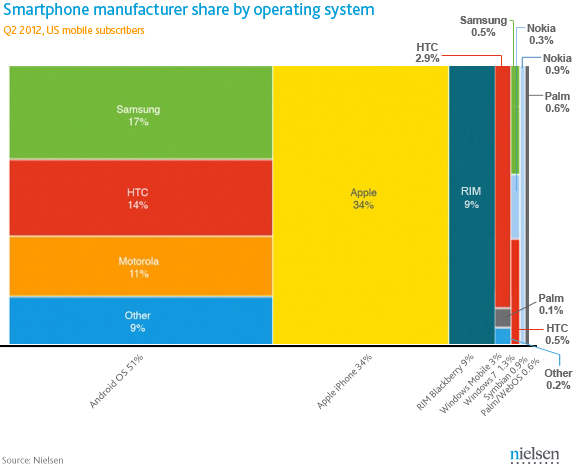