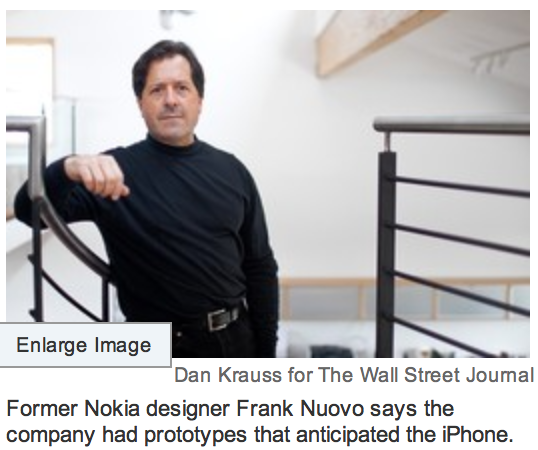 …but horrific corporate management has it in a place where it may be forced into a patent firesale.

Interesting article on Nokia in the Wall Street Journal last night. It starts with:

More than seven years before Apple Inc. rolled out the iPhone, the Nokia team showed a phone with a color touch screen set above a single button. The device was shown locating a restaurant, playing a racing game and ordering lipstick. In the late 1990s, Nokia secretly developed another alluring product: a tablet computer with a wireless connection and touch screen—all features today of the hot-selling Apple iPad.

“Oh my God,” Mr. Nuovo says as he clicks through his old slides. “We had it completely nailed.”

Hardware is a key element, but, as we saw with Apple’s 2002 iPad, software, marketing, ecosystem and maybe most of all timing also play important roles when determining the success of a product line. When the time was right and the opportunities presented themselves, however, Nokia failed to execute.

“What struck me when we started working with Nokia back in 2008 was how Nokia spent much more time than other device makers just strategizing,” Qualcomm Chief Executive Paul Jacobs said. “We would present Nokia with a new technology that to us would seem as a big opportunity. Instead of just diving into this opportunity, Nokia would spend a long time, maybe six to nine months, just assessing the opportunity. And by that time the opportunity often just went away.”

Anecdotally, I have a friend who worked with Nokia in advertising. He would say the same thing: The company was gridlocked by politics and poor leadership. Different product groups treated different parts of the company as competitors and not compatriots.

And, five years after the iPhone unveiled, Nokia is in a tail spin. This is causing a cash crunch so huge that it will likely be forced to sell off a lot of those early patents that are valued around $6 billion—which is just slightly under Nokia’s current $6.5 billion market cap. That means investors have very little confidence in the firms ability to succeed. In fact, had Google waited, Nokia might have been a better patent purchase target than Motorola.

Nokia still is struggling to turn its good ideas into products. The first half of the year saw Nokia book more patents than in any six-month period since 2007, Mr. Elop said, leaving Nokia with more than 30,000 in all. Some might be sold to raise cash, he said.

“We may decide there could be elements of it that could be sold off, turned into more immediate cash for us—which is something that is important when you’re going through a turnaround,” Mr. Elop said.

It is pretty sad that a company like Nokia is not worth more than the patents it holds.
40.714513-74.005122
Author Ad Placeholder
Will only appear on redesign env.