AT&T just released its quarterly numbers, and the company’s smartphone sales are still completely dominated by the iPhone. The company activated 3.7 million iPhones for the quarter, which represents 73 percent of all the smartphones sold (if each is taken as a new iPhone sold – there is likely a negligible difference). Additionally, 22 percent of the new iPhones sold were to new AT&T customers.

The percentage would represent a slight downturn for AT&T over last quarter, where iPhone represented around 78 percent of smartphone activations with 4.3 million cumulative. The number is also up slightly over the year ago. AT&T activated 3.6 million iPhones in Q2 2011. Note: Sprint did not sell iPhones at the time. 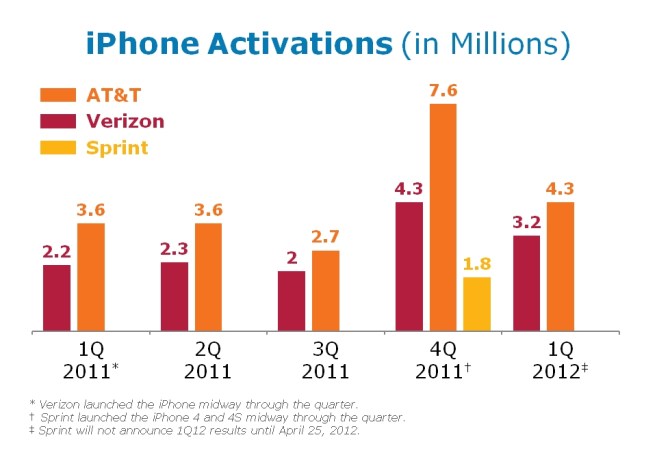 Perhaps most interestingly, with AT&T’s Smartphone numbers at 77% and  iPhones representing 73% of that, iPhones, over a half year after launch, still represent over 55% of AT&T’s total Phone sales. AT&T is truly dependent on Apple.

We will cover Apple’s quarterly announcement later today, where we will get total device numbers across Apple’s line of products.