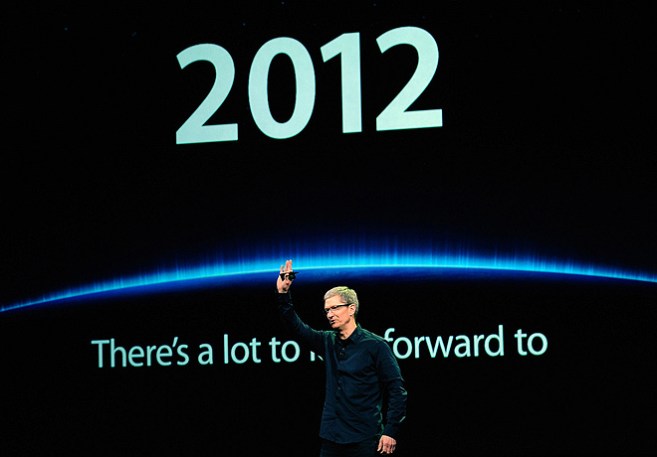 This past quarter has been a phenomenal one for Apple in terms of products. Last month, Apple announced major software updates for iOS and OS X, iOS 6 and OS X Mountain Lion. In addition, the company released major updates to both the MacBook Pro and MacBook Air notebook families. Apple has been selling its new Retina display third-generation iPad, 1080P-capable Apple TV, and iPhone 4S for many months now, so it will be interesting to see the continuous sales numbers for those products. While Apple has been selling those aforementioned products, rumors and reports with information about a smaller version of the iPad and an iPhone with a larger display have been rampant.

You can find the live blog of the call – where Apple CEO Tim Cook and CFO Peter Oppenheimer typically speak – after the break:

– We should be starting in about 15 minutes.

– Apple currently down around $28-29 in after hours trading:

– Call starting: Cook and Oppenheimer to be on call.

– Oppenheimer talking about the earnings covered in the press release. YOY growth of 23%, 6.5b increase over last June quarter. Growth attributed to strong iPad and iPhone growth.

– Best quarter ever for education sales.

– Talking iPods: 6.8 million sold in the quarter. Ahead of Apple’s expectations. iPod touch over half of all iPods sold. iPod has 70% marketshare of Mp3 players.

– Great interest in iTunes U. 14 million iTunes U app downloads.

– Oppenheimer talking iPhones. 250 carriers in over 100 countries. 8.3 million iPhones in channel inventory. Apple remains in its target range for inventory of iPhones.

– Oppenheimer talking the importance and growth of iPhone in the enterprise.

-Oppenheimer saying that iPad is very successful in the United States education market. $399 iPad 2 price drop is helping in education. Twice as many iPads as Macs in U.S. education. Apple is very happy with this. Single school school district has bought 11K iPads. This is for students and teachers. Teachers at this school (Mansfield) will be using great software and technology to personalize content for students through iPads.

– iPad in the enterprise: adoption has tripled over the last year. Talking about how British Airways and a Japanese home building company use iPads to help their own internal work and customers.

– Apple is very excited about iOS 6.

– Talking dividend: $2.65 cents per share. The board has authorized a three year share buyback program. This was previously announced.

– Closing: Apple is happy with these earnings. Very pleased with iPads, biggest education quarter ever in the U.S.

– Apple very excited about their upcoming products. They are “amazing.”

– Question about the fall transition… Oppenheimer: “We could not be more confident in our product pipeline.” Cook: Clearly a lot of anticipation for future products.

– Question: Can Cook go into detail about Apple’s carrier discussions. Cook laughs. Apple will continue to make the very best products in the world. Carriers told Tim Cook that Apple’s iPhone have many more advantages over other devices. Apple’s engineering teams work with carriers in order to provide the most efficiency for data usage. Cook says that carriers will be motivated to provide iPhones to customers.

-Apple questioned about PassBook and if that hints into Apple’s future payment plans. Cook won’t comment specifically on that.