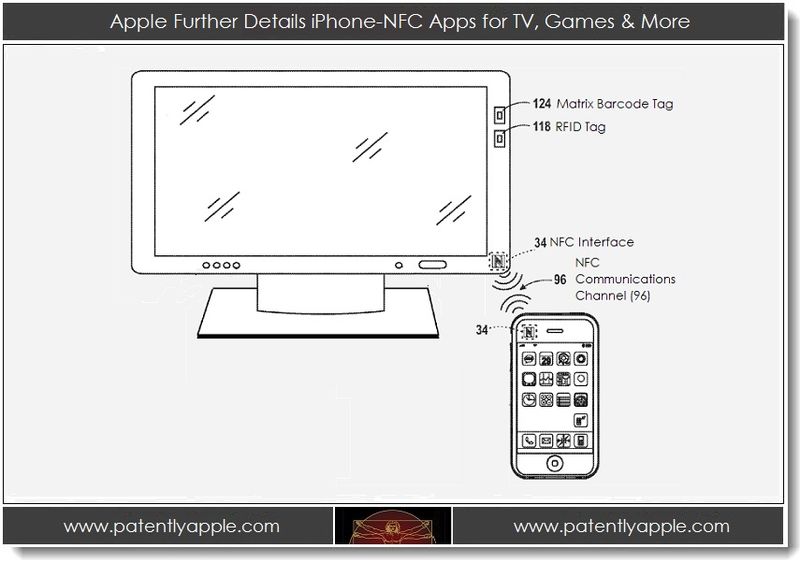 9to5Mac reported last month that prototypes of the next iPhone contained Near Field Communications hardware. The tech could obviously be used with the PassBook app to create some wallet-type functionality, but that is just the tip of the iceberg.

The US Patent & Trademark Office published more patent applications today from Apple that indicated the company envisioned much more NFC capabilities than a Wallet app. The company apparently filed the applications between 2009 and 2010, and the graphics depict an iPhone interacting and controlling everything from a television and DVR to a standalone camera and a projector.

Our report mainly focuses on the new system as it relates to an iDevice controlling and interacting with a possible standalone television in addition to an expanded version of Apple’s current Apple TV styled device. The updated Apple TV could one day control cable or satellite television programming and video game play via a video game controller. This would really be a boost for Apple if users were able to play high end RPG video styled games with a standard styled controller. Further, Apple’s invention runs deep and they envision NFC ready iDevices being able to control standalone cameras, projectors, in-home security systems, lawn sprinkler systems, your thermostat, garage door and more. One of these fine days, future iDevices will finally support NFC; and when they do – watch out, because Apple will open the floodgates and release a new generation of applications noted in this report and others like their forthcoming iWallet. Will Apple’s next generation iPhone 5 finally be the one that will introduce NFC? Only time will tell.

Apple’s patent application included more than 150 illustrations, so it is immediately clear the folks in Cupertino are not just eyeing the credit card/payments market. Earlier this month, 9to5Mac published another NFC-related report that indicated Apple visualized the tech integrated in an iTravel app for speedier check-in and ticketing identification.