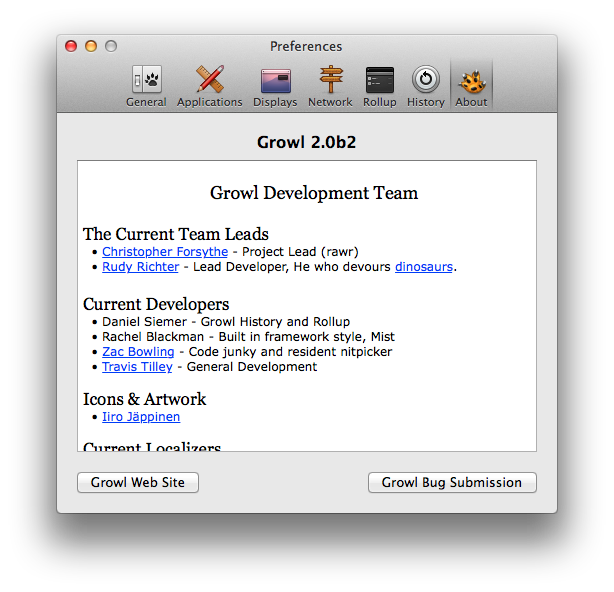 A few days ago, 9to5Mac reported on Hiss, a system for pushing Growl messages to the Mountain Lion Notification Center. Near the end of that report, we noted Growl was also working on a similar update, and we are happy to bring a first look at that update today.

Growl 2.0 is an upcoming major update to one of the most popular notification platforms on the Mac, and it brings full support for Mountain Lion and the Retina MacBook Pro (Retina images are still in progress, as you will see in some of these screenshots). While version 2 is currently in beta, the good folks at Growl gave us permission to show a sneak peek at the future update.

One of the biggest changes in the new version is native support for Notification Center. For the most part, this basically functions the same way Hiss does, but the layout of the notification text makes it easier to spot which app is sending each message.

Another huge change to Growl is the ability to choose separate “actions” and notification styles. In the current version, some Growl styles, such as “MailMe” or “SMS”, would carry out an action (emailing, texting, etc.) to notify you. While this seems like a good way to get notified of certain actions you may want to monitor when you leave the house, it becomes annoying when you realize that choosing one of those styles will cause the notification banners to stop appearing on your screen. Growl 2 remedies this by separating “actions” and notification styles, allowing you to both show a banner and receive an email about the same message. According to an email exchange with Growl’s lead developer, future betas will bring the ability to selectively decide which applications send their messages to Notification Center and which apps use the highly customizable Growl banners.

Some other new actions include native integration with Prowl and Boxcar, providing even more ways to get your Growl messages pushed to your mobile device.

Growl 2 also features a few cosmetic and functional changes to areas such as the ability to assign a keyboard shortcut to the Rollup window, which collects missed notification while you are away from your computer. The update also includes a few new designs for Growl banners, and it allows you to setup multiple versions of the same style with different settings (so the same design may appear for a different length of time, or use a different opacity level depending on which app sent it).

Overall, Growl 2 is a very impressive update with a ton of new features and customization options that should satisfy almost anyone’s requirements for a notification system—even if they prefer Apple’s own Notification Center over third-party options.

See the gallery below for even more screenshots of Growl 2 in action!

Please note that not all of the notification styles listed in these screenshots come with Growl. Some are additional styles that I have installed on my own over the years. All of them are free and work with the current version of Growl.