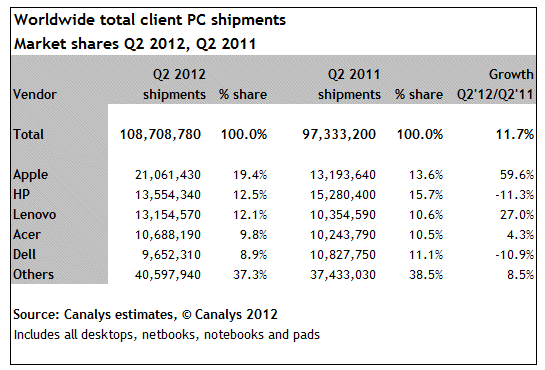 Global client PC shipments rose 12 percent year-on-year in Q2 2012, with the new iPad recognized as the primary influence on growth rates, according to the latest data report from Canalys, who treat the iPad as a PC (and with the ability to operate without being tethered and to use external keyboards and monitors and the like, why wouldn’t you?)

Growth in pads more than compensated for disappointing sales of Ultrabooks. The new iPad had the biggest single impact on growth rates in the quarter, but Asus and Samsung made progress with their Transformer and Galaxy Tab product lines. Total pad shipments increased 75% to 24 million units, representing 22% of all PCs.

“There is now a large base of replacement buyers that simply must have the latest Apple product, and the decision to continue shipping the iPad 2 at lower price points has opened up new customers, for example in education,” added Canalys Research Analyst Tom Evans.

Samsung lead as the “Android pad vendor” in Q2. It more than doubled its Galaxy Tab shipments compared to Q2 2011, and Canalys said the company is “Apple’s chief challenger” in the tablet sector.

Get the full report at Canalys.