ComScore: Ahead of iPhone refresh, Apple outgrew Android and the iPhone took market share from Samsung, Motorola and LG

Today’s comScore report measured the U.S. phone landscape from March to June with some surprising surges from Apple noted. Apple was the only manufacturer to gain market share in the overall handset business by growing 1.4-points in the three months. This is particularly notable because Apple’s iPhone is expected to get refreshed in September.

Additionally, iOS outgrew Android in the three-month span from 1.7-points to 0.6-points (see chart below). The gains by both OSes to a whopping 84 percent of all smartphones measured were at the expense of Microsoft, RIM, and Symbian. On the changes, comScore said:

Google Android continued to grow its share in the U.S. smartphone market, accounting for 51.6 percent of smartphone subscribers, while Apple captured 32.4 percent.

For the three-month average period ending in June, 234 million Americans age 13 and older used mobile devices. Device manufacturer Samsung ranked as the top OEM with 25.6 percent of U.S. mobile subscribers, followed by LG with 18.8 percent share. Apple continued to gain share in the OEM market, ranking third with 15.4 percent of mobile subscribers (up 1.4 percentage points), followed by Motorola with 11.7 percent and HTC with 6.4 percent (up 0.4 percentage points).

More than 110 million people in the U.S. owned smartphones during the three months ending in June, up 4 percent versus March. Google Android ranked as the top smartphone platform with 51.6 percent market share (up 0.6 percentage points), while Apple’s share increased 1.7 percentage points to 32.4 percent. RIM ranked third with 10.7 percent share, followed by Microsoft (3.8 percent) and Symbian (0.9 percent). 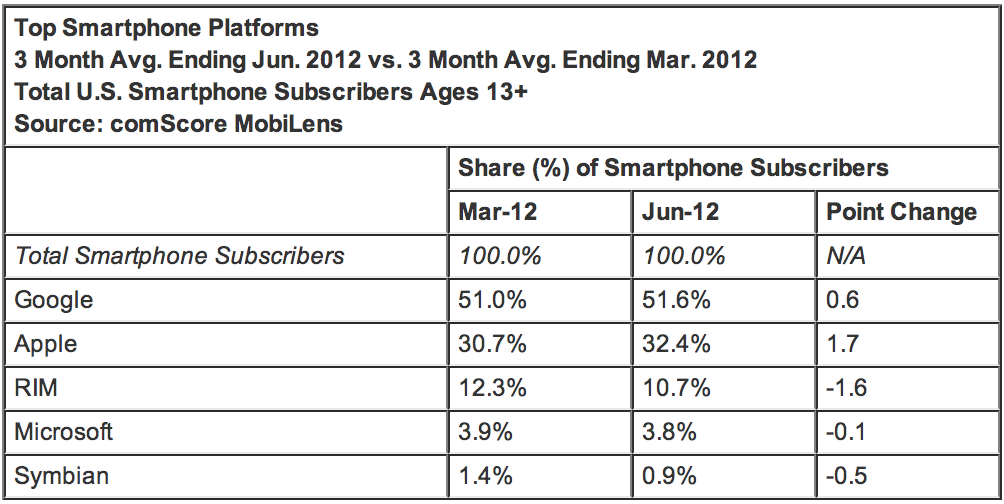